NASA’s Earth Observing System Data and Information System (EOSDIS) has been a central component of the NASA Earth observation program since the 1990s, providing end-to-end capabilities for managing NASA Earth science data from various sources — satellites, aircraft, field measurements, and various other programs. And although the system has changed substantially over the past 27 years, the global user community’s satisfaction with EOSDIS products and services has remained consistent. But readers need not take our word for it. According to the 2021 American Customer Satisfaction Index (ACSI) survey of EOSDIS data, products, and services, EOSDIS received a Customer Satisfaction Index (CSI) score of 81 out of 100, the highest score EOSDIS has ever received.

The ACSI survey is administered by the CFI Group, an independent organization contracted by the federal government to assess user satisfaction with products and services at numerous federal agencies, including the National Weather Service, the General Services Administration, and the U.S. Department of Education, among others. Its aim is to measure customer satisfaction with EOSDIS at a national level for each Distributed Active Archive Center (DAAC) and identify the key areas that NASA can leverage across the DAACs to continuously improve its service to its customers. Among the areas it examines are customer support, product selection and order, product search, product documentation, product quality, and product delivery.

NASA EOSDIS’s CSI score of 81 indicates a high level of satisfaction with its products and services, and given that the CSI score is an aggregate of several scores (calculated using the proprietary ACSI methodology), scores in the upper-70s represent a “strong” performance, especially when maintained over several years. Likewise, increases in CSI scores of just a few points can denote a significant increase in user satisfaction.

NASA’s EOSDIS has never received a CSI score lower than 74 since the first EOSDIS ACSI survey was conducted in 2004. As with all previous surveys spanning more than 17 years, NASA’s EOSDIS outscored the federal government, which received an average score of 63 in 2021. In addition, CSI scores for EOSDIS DAACs ranged from 86 to 76, with an average aggregate CSI of 80.

The results from the annual ACSI survey provide something of a blueprint that the DAACs and NASA’s Earth Science Data and Information System (ESDIS) Project (which manages EOSDIS science operations, including data archival and distribution) can use to tailor their products and services so they better align with and serve user needs.

ESDIS, which coordinates and facilitates the annual ACSI survey, opted to use an abridged or “short-form” version of the survey questionnaire in 2021. The short form version of the survey was created to introduce some variation into this annual accounting of EOSDIS products and services and prevent any survey fatigue among respondents while continuing the more than 20-year record of results. As you might expect, the short form has fewer questions and takes less time to complete (i.e., approximately 5 minutes vs. 15-20 minutes) than the longer survey, but it focuses on DAAC-specific questions, which afford the DAACs greater insights. In the longer survey, these questions could be given short shrift given that they come after the initial first part of the survey, which is quite thorough.

Outside of three survey questions asking respondents to rate their overall expectations, perceived quality, and perceived value of EOSDIS services and products on a 1 to 10 scale, the survey asked respondents to evaluate their experience with the specific DAAC or DAACs from which they receive data and products. (Note: respondents were allowed to skip questions pertaining to DAACs they did not consult with or contact). The survey also allowed respondents to provide open-ended comments, providing EOSDIS with direct and valuable insights regarding respondents’ likes, dislikes, and thoughts on suggested improvements. These user comments are one of the most valuable aspects of the survey, as DAAC managers can use them to assess user needs and can look across DAACs to gain insight into user preferences and best practices.

In the following summary tables, total percentages may not equal 100% due to survey questions allowing for multiple responses; all non-percentage values are out of 100. 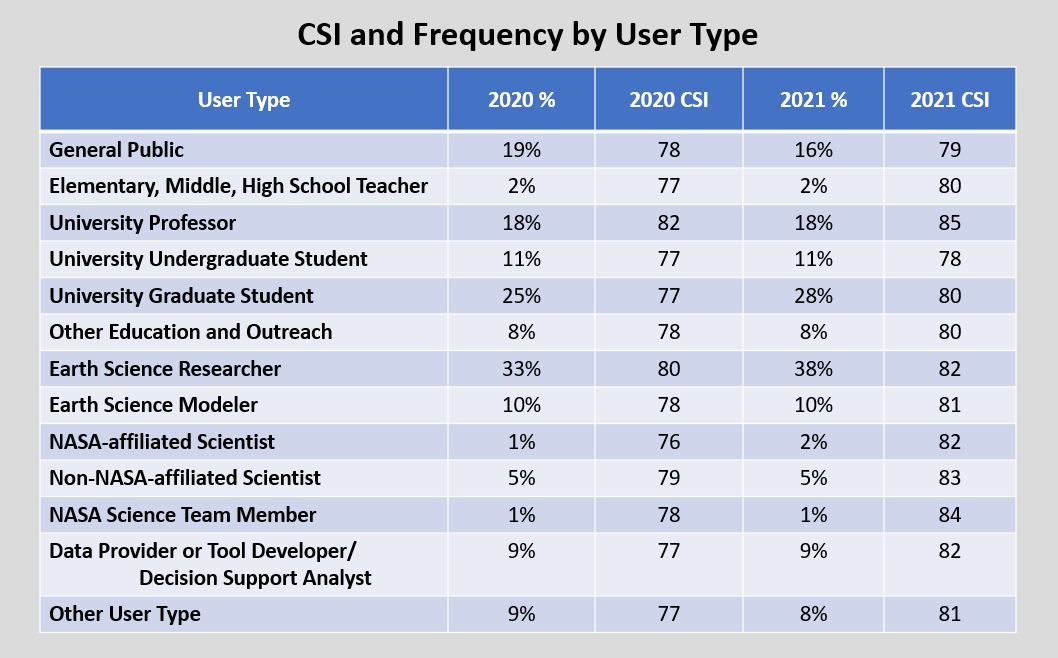 As in past surveys, respondents self-identifying as Earth Science Researchers made up the majority of EOSDIS data users (38%), followed by University Graduate Students (28%) and University Professors (18%). These percentages are similar to those of the 2020 survey, except for in the case of members of the General Public who comprised 19% of users in 2020, a 3% decrease as compared to 2021. On the contrary, in 2020, Earth Science Researchers made up 33% of users. In 2021, that number rose to 38%. 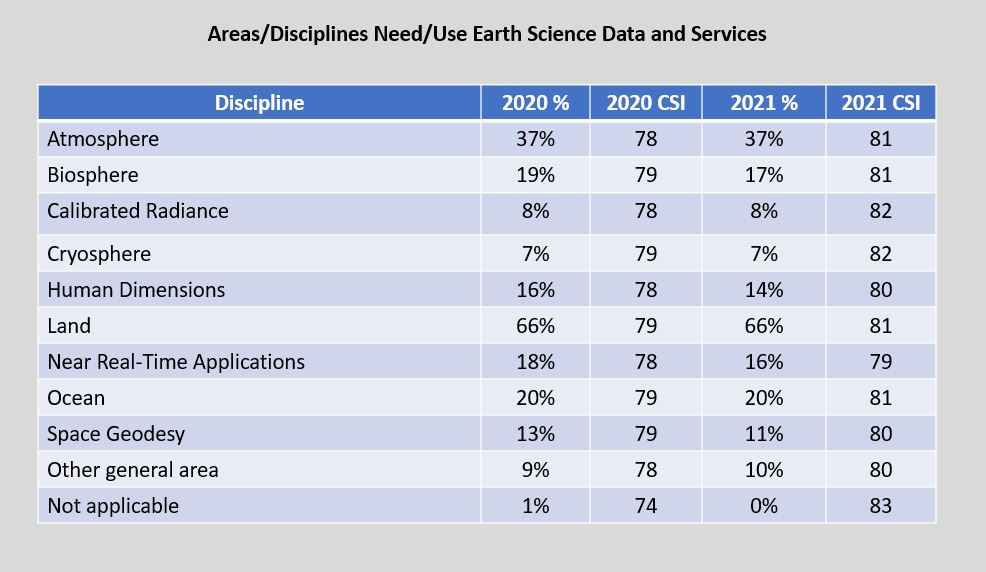 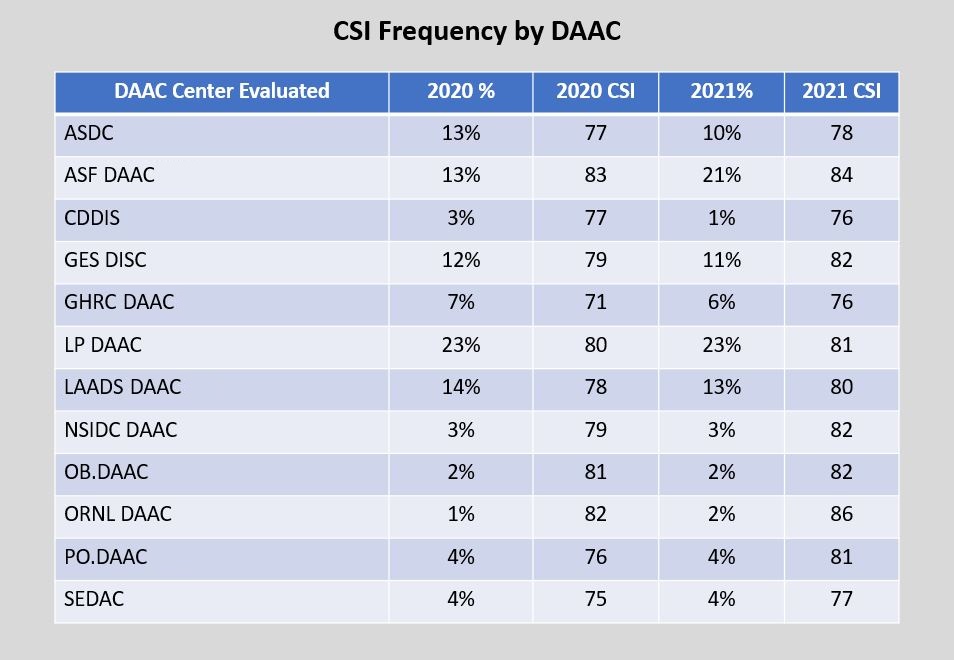 NASA’s EOSDIS is comprised of twelve discipline-specific DAACs that manage, archive and distribute a variety of discipline-specific Earth science data. For example, the data users get from ASDC pertains to the atmosphere, data from LP DAAC applies to land processes, and data from SEDAC pertains to human interactions in the environment. Each year, ACSI survey respondents are asked to evaluate their experience and satisfaction with the specific DAAC or DAACs from which they receive data, products, and services, and CSI scores were computed for each DAAC based on individual DAAC survey responses. All DAACs achieved CSIs between 76 and 86, with a strong average aggregate DAAC CSI score of 80. NASA’s Oak Ridge National Laboratory DAAC (ORNL DAAC) received the highest CSI score of the 2021 survey (86) and NASA's Alaska Satellite Facility DAAC (ASF DAAC) received the second-highest CSI score of the 2021 survey (84). NASA's Goddard Earth Sciences Data and Information Services Center (GES DISC), National Snow and Ice Data Center DAAC (NSIDC DAAC) and Ocean Biology DAAC (OB.DAAC) received the third-highest CSI scores of the 2021 survey (82). NASA's Physical Oceanography DAAC (PO.DAAC) saw the largest positive change (+5 points) in CSI score between 2020 and 2021, moving from 76 to 81. Readers should note that fluctuations in DAAC CSI scores are common as the DAACs routinely work to improve their services to meet the needs of their user communities.

Would you like to participate in a future ACSI surveys? Anyone who downloads data from an EOSDIS DAAC during the year will automatically be added to the survey list. Users can also visit the DAAC or DAACs from which they acquire data and request that their email address to be added to the list of survey recipients.

A summary of the 2021 EOSDIS ACSI report, along with summaries of all EOSDIS ACSI surveys dating back to the first survey in 2004, are available on the ACSI Reports page in the System Performance and Metrics section of the Earthdata website. Full reports are available upon request.