Large-scale volcanic activity may last only a few days, but the massive outpouring of gases and ash can influence climate patterns for years. 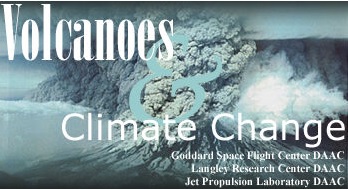 When Mount Pinatubo erupted in the Philippines June 15, 1991, an estimated 20 million tons of sulfur dioxide and ash particles blasted more than 12 miles (20 km) high into the atmosphere. The eruption caused widespread destruction and loss of human life. Gases and solids injected into the stratosphere circled the globe for three weeks. Volcanic eruptions of this magnitude can impact global climate, reducing the amount of solar radiation reaching the Earth's surface, lowering temperatures in the troposphere, and changing atmospheric circulation patterns. The extent to which this occurs is an ongoing debate.

Large-scale volcanic activity may last only a few days, but the massive outpouring of gases and ash can influence climate patterns for years. Sulfuric gases convert to sulfate aerosols, sub-micron droplets containing about 75 percent sulfuric acid. Following eruptions, these aerosol particles can linger as long as three to four years in the stratosphere.

Major eruptions alter the Earth's radiative balance because volcanic aerosol clouds absorb terrestrial radiation, and scatter a significant amount of the incoming solar radiation, an effect known as "radiative forcing" that can last from two to three years following a volcanic eruption.

"Volcanic eruptions cause short-term climate changes and contribute to natural climate variability," says Georgiy Stenchikov, a research professor with the Department of Environmental Sciences at Rutgers University. "Exploring effects of volcanic eruption allows us to better understand important physical mechanisms in the climate system that are initiated by volcanic forcing."

The research team ran a general circulation model developed at the Max Planck Institute with and without Pinatubo aerosols for the two years following the Pinatubo eruption. To study the sensitivity of climate response to sea surface temperature, using data from NASA's Physical Oceanography Distributed Active Archive Center (PO.DAAC), they conducted calculations with climatologically mean sea surface temperature, as well as with those observed during particular El Niño and La Niña periods.

By comparing the climate simulations from the Pinatubo eruption, with and without aerosols, the researchers found that the climate model calculated a general cooling of the global troposphere, but yielded a clear winter warming pattern of surface air temperature over Northern Hemisphere continents. The temperature of the tropical lower stratosphere increased by 4 Kelvin (4°C) because of aerosol absorption of terrestrial longwave and solar near-infrared radiation. The model demonstrated that the direct radiative effect of volcanic aerosols causes general stratospheric heating and tropospheric cooling, with a tropospheric warming pattern in the winter.

This temperature pattern is consistent with the existence of a strong phase of the Arctic Oscillation, a natural pattern of circulation in which atmospheric pressure at polar and middle latitudes fluctuates, bringing higher-than-normal pressure over the polar region and lower-than-normal pressure at about 45 degrees north latitude. It is forced by the aerosol radiative effect, and circulation in winter is stronger than the aerosol radiative cooling that dominates in summer.

NASA's Upper Atmosphere Research Satellite (UARS) enables study of the chemistry, dynamics and energy balance in the atmosphere layers above the troposphere. UARS provides near-global (-80 degrees to +80 degrees) measurements of the atmospheres' internal structure as well as measurements of external influences acting on the upper atmosphere. These measurements are made simultaneously in a coordinated manner. The UARS dataset spans from September 18, 1991 through August 31, 1999. UARS data are available from GES DISC.

Multi-Channel Sea Surface Temperature (MCSST) data are derived from measurements of emitted and reflected radiance by the five-channel Advanced Very High Resolution Radiometers (AVHRR) onboard the NOAA -7, -9. -11 and -14 polar orbiting satellites. MCSST data currently extend from November 11, 1981 through June 7, 2000, and are updated as new data become available. The sea surface temperature data sets may be ordered from PO.DAAC.

Man-made, or "anthropogenic" emissions can make the consequences of volcanic eruptions on the global climate system more severe, Stenchikov says. For instance, chlorofluorocarbons (CFCs) in the atmosphere start a chain of chemical reactions on aerosol surfaces that destroy ozone molecules in the mid-latitude stratosphere, intensifying observed stratospheric ozone depletion.

"While we have no observations, the 1963 Agung eruption on the island of Bali probably did not deplete ozone as there was little atmospheric chlorine in the stratosphere. In 1991 after the Pinatubo eruption, when the amount of CFCs in the stratosphere increased, the ozone content in the mid-latitudes decreased by 5 percent to 8 percent, affecting highly populated regions," says Stenchikov.

NASA and the National Science Foundation have funded Robock and Stenchikov to study the Pinatubo eruption in more detail, and to conduct another model comparison with the volcanic aerosol data set. They plan to combine SAGE II data with available lidar and satellite data from various DAACs to improve their existing data set.

By understanding the impact of large volcanic eruptions on Earth's climate system in more detail, perhaps scientists will be in a better position to suggest measures to lessen their effects on people and natural resources.