Image captured on 2 August 2020, by the MODIS instrument, aboard NASA's Aqua satellite. 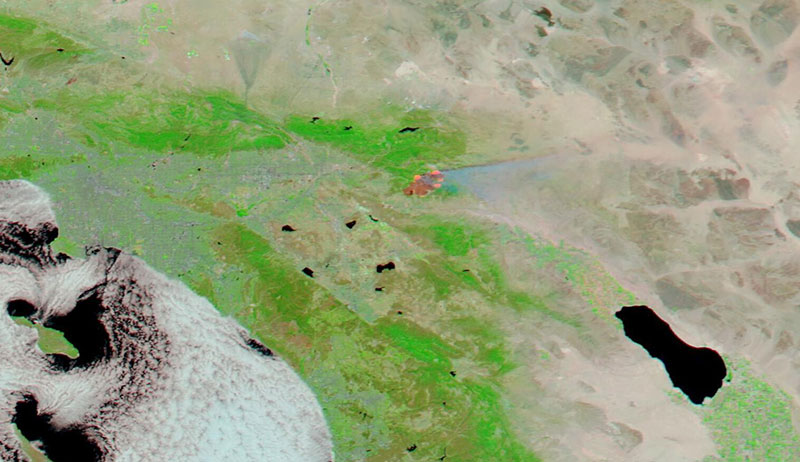 False-color image of the Apple Fire, burning in Riverside and San Bernadino counties in California, USA. The image was acquired on 2 August 2020 by the Moderate Resolution Imaging Spectroradiometer (MODIS) instrument, aboard NASA's Aqua satellite. The image is comprised of the MODIS bands 7-2-1. This band combination is useful for highlighting burned areas. Burned areas or fire-affected areas are characterized by deposits of charcoal and ash, removal of vegetation and/or the alteration of vegetation structure. When bare soil becomes exposed, the brightness in Band 1 may increase, but that may be offset by the presence of black carbon residue; the near infrared (Band 2) will become darker, and Band 7 becomes more reflective. When assigned to red in the image, Band 7 will show burn scars as deep or bright red, depending on the type of vegetation burned, the amount of residue, or the completeness of the burn. Bright red areas on the outer edges often signifies actively burning areas.

View the Apple Fire at night with the Day/Night Band of the VIIRS instrument aboard the joint NASA/NOAA Suomi NPP satellite. Turn on and off the fire layer to see the light from the fire in contrast to the nearby city lights to the west and southeast.

Find out more about the Apple Fire at InciWeb.