A new comparison feature in the most recently released version of NASA’s Worldview data visualization application makes it easy to compare two images.

NASA’s Worldview data visualization application has always been an easy way to interactively explore imagery created from data acquired by Earth observing satellites. A just-released Worldview update takes care of numerous bug fixes and introduces an exciting new feature: A Comparison button that makes it easier than ever to look at two images at the same time.

Enter the Worldview “Compare Mode” by clicking the “Start Comparison” button in the lower right corner of the Worldview control panel. This gives you three options for toggling between two images: swipe, opacity, or spy. “Swipe” is the default setting, and divides the Worldview screen into two halves representing the two images you want to compare: A (left side) and B (right side).

Let’s say you want to do a simple comparison to look at how much the Aral Sea has decreased in size between 2000 and 2017. The Aral Sea, which is located between Kazakhstan in the north and Uzbekistan in the south, was once one of the largest lakes in the world. Diversion of rivers feeding the lake during the 1960s caused the lake to dramatically shrink in size. Today, vast stretches of this formerly huge water body are now desert. 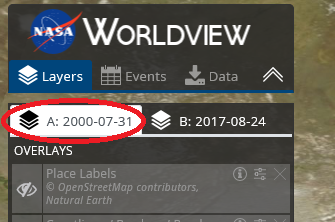 For our first image, we’ll select a relatively cloud-free true-color image of the lake that was acquired by the Moderate Resolution Imaging Spectroradiometer (MODIS) instrument aboard NASA’s Terra Earth observing satellite on July 31, 2000. Select this date as your “A” image.

For our B-side image comparison, we’ll use an image of the lake acquired in 2017. In this example we’ll select a Terra MODIS true-color image from August 24, 2017. Click on the “B” tab to select it (the B tab turns white) and use the buttons on the date block (which is on the left side of the date slider at the bottom of the screen) to manually adjust the image date to “2017 August 24.”

Imagery available in Worldview come from GIBS, which is part of NASA’s Earth Observing System Data and Information System (EOSDIS). GIBS provides quick access to more than 700 satellite imagery products covering every part of the world (including the poles). GIBS imagery can be interactively explored using Worldview or rendered in your own web client or GIS application using the GIBS API.

Check out the new Worldview comparison feature! While you’re in Worldview, be sure to explore some of the other features of this powerhouse application (like making animated GIFs of individual images or viewing MODIS global daily base map images dating back to 2000). See how easy it is using Worldview to explore your world, your way!