Nearly 20 Years of Change at Your Fingertips

Interactively explore your world your way with nearly 20 years of MODIS global imagery and the EOSDIS Worldview data visualization application.

If you drive north on Argentina’s National Route 9 out of Córdoba, turn right onto Ruta Provincial (RP) 17 at Villa del Totoral, then hang a left onto RP3 at Balnearia, you’ll eventually come to the health resort of Miramar at the southern end of a lake called Mar Chiquita. The lake is one of the largest saline lakes in the world, more than 1,000 km2 larger than Utah’s Great Salt Lake.

Along with the tremendous variety of resident and migratory bird species in the lake’s wetlands, one aspect that makes Mar Chiquita unique is that its water level is constantly changing. These extreme water level fluctuations affect not only its salinity, but also the amount of dust blowing off the lake as it periodically dries out. For Dr. Santiago Gassó, an Associate Research Scientist with NASA’s Goddard Earth Sciences Technology And Research (GESTAR) program and Morgan State University, the lake is a living laboratory for his studies into dust transport—one that is best viewed and studied from great height and with years of observations. In other words, the types of imagery provided by NASA’s constellation of Earth observing satellites.

“I’m interested in dust coming out of South America,” says Dr. Gassó. “For instance, Mar Chiquita shrank significantly in 2008, 2009, and 2010. [Using satellite imagery], I can go and check more than a decade of images and find what days were active, how much dust [was produced], and compare activity to El Niño and La Niña years.”

A valuable resource for Dr. Gassó’s studies of Mar Chiquita is imagery from the Moderate Resolution Imaging Spectroradiometer (MODIS) instrument aboard NASA’s Terra and Aqua Earth observing satellites. Terra launched on December 18, 1999, and was followed by Aqua in 2002. Between them, the two satellites have spent more than 12,000 days in orbit and have amassed a tremendous archive of imagery and data.

Now, all global MODIS imagery dating back to the operational start of MODIS data collection in 2000 is available through NASA’s Global Imagery Browse Services (GIBS). The nearly 20 years of MODIS imagery is the longest continuous daily global satellite observation record of Earth ever compiled. This imagery can be viewed rapidly and interactively using the Earth Observing System Data and Information System’s (EOSDIS) Worldview visualization application.

The availability of all global MODIS imagery in GIBS is the result of more than a half-decade of work involving several NASA teams. “This is the culmination of the work of hundreds of people, scientists and support staff, keeping the satellites healthy to enable us to get these data from MODIS and create these images,” says Ryan Boller, the EOSDIS Data Visualization Lead and Worldview Project Owner. “Having all the MODIS imagery available [in GIBS] has been a long-term goal of ours.”

GIBS was established by the EOSDIS in 2011, and provides quick access to over 600 satellite imagery products covering every part of the world. Worldview, which was released in December 2011, pulls imagery from GIBS and allows users to interactively overlay these same 600+ Earth observing data products on top of a MODIS global base map from Terra or Aqua and easily create data animations (a daily global base map from data collected by the Visible Infrared Imaging Radiometer Suite [VIIRS] aboard the Suomi National Polar-orbiting Partnership [Suomi-NPP] satellite also is available dating back to November 24, 2015). 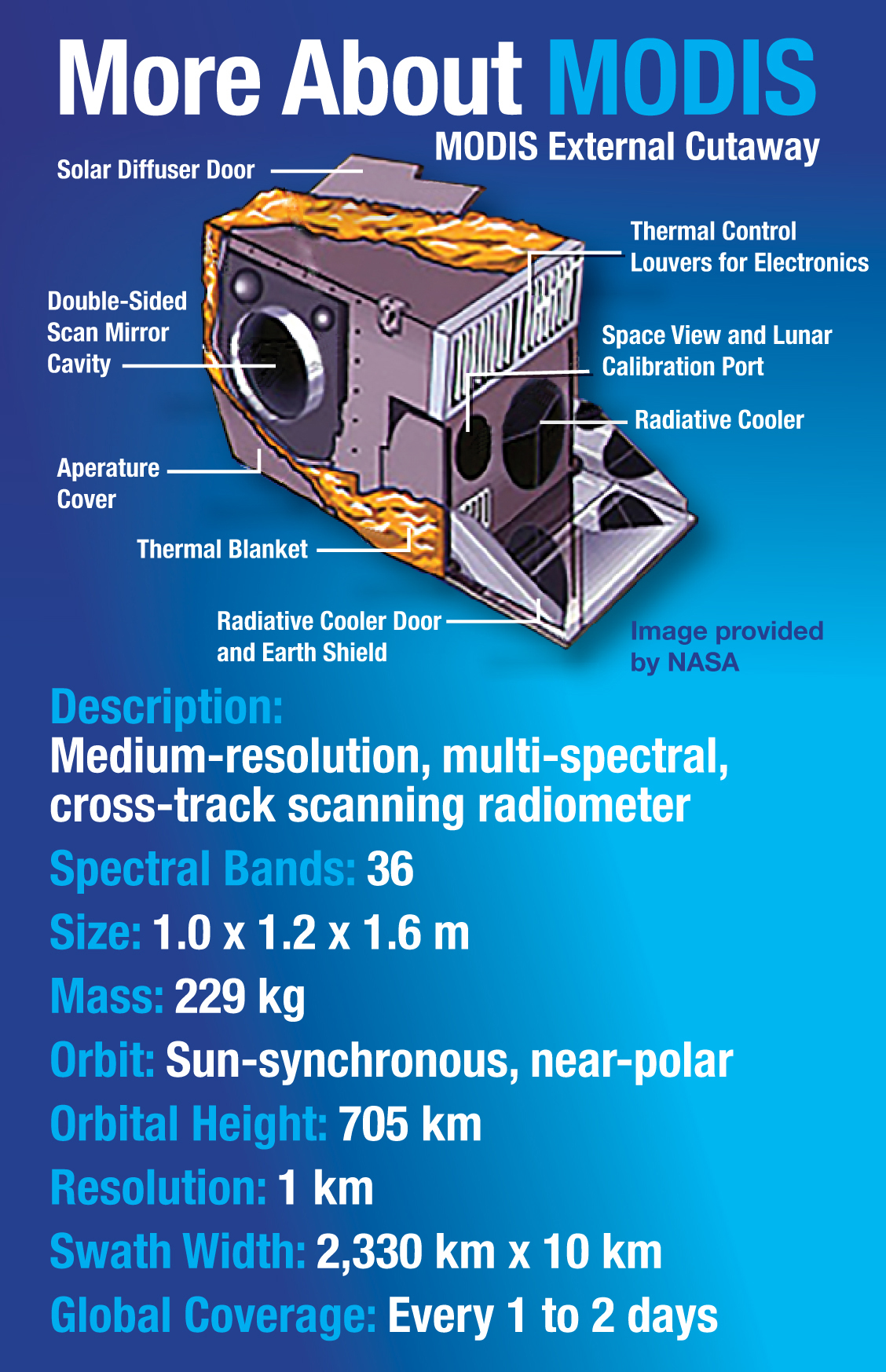 The MODIS instrument has a number of attributes that make it popular with researchers. “MODIS is the right balance of coverage, both spatially and in time. It’s also the right combiation of spectral bands,” says Dr. Gassó. “With the two sensors deployed—one on Aqua and the other on Terra - the whole planet is observed many times and at least once over the tropics every day, which is a great benefit. The spatial resolution is about right for detecting general features. If you see a dust plume or a smoke plume [in a MODIS image], you can then see about getting a higher resolution image from, say, Landsat to take a closer look. Worldview makes this easy since you can overlay the Landsat orbital tracks on the MODIS images.”

Near real-time data and imagery from the Terra MODIS instrument have been available since 2001 through the EOSDIS Rapid Response system. The static Rapid Response imagery originally was developed to meet the needs of the U.S. Forest Service, the National Interagency Fire Center, and other federal and state users. By 2007, the Rapid Response system had incorporated data and imagery from the Aqua MODIS instrument. As Boller notes, the advent of global mapping services like Google Maps created a desire for interactive imagery for any point on Earth. As a result, an effort to create daily global MODIS imagery was initiated in 2011 along with the development of an application to allow users to easily interact with this imagery. “We transitioned from the static imagery of Rapid Response to interactive imagery provided through GIBS for viewing in Worldview,” he says.

The first daily global MODIS imagery base maps were available in GIBS for interactive viewing in Worldview in 2012, and daily MODIS base maps have been produced ever since. This effort is a collaboration between the GIBS and Worldview teams and NASA’s MODIS Adaptive Processing System (MODAPS).

MODAPS is an operations group that was established prior to the launch of Terra for processing MODIS data. These processed data are sent for archiving and distribution to the EOSDIS Land Processes Distributed Active Archive Center (LP DAAC), National Snow and Ice Data Center DAAC (NSIDC DAAC), Ocean Biology DAAC (OB.DAAC), and Level 1 and Atmosphere Archive and Distribution System DAAC (LAADS DAAC).

While continuous MODIS global imagery has been available in GIBS from 2012 to the present, there still was a gap in this imagery between the start of the MODIS data record in 2000 and the start of the daily global MODIS base maps in 2012. “Users said to us, ‘We know you have the source data available, and we’d like to see it as imagery in Worldview,’” says Boller. The responsibility for processing the missing MODIS imagery for GIBS fell to MODAPS. 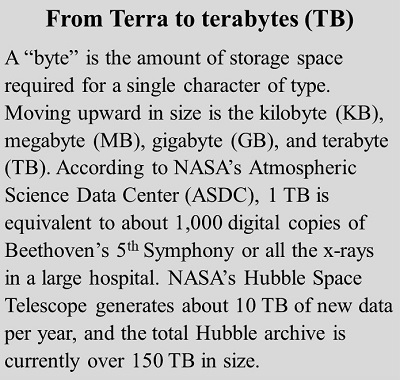 For the MODAPS team, filling in the MODIS imagery archive gap was a challenge, especially given the volume of data involved and the processing resources available. According to Kurt Hoffman, the MODIS Lead Operations Analyst at MODAPS, the volume of MODIS data from Terra and Aqua required to produce GIBS imagery for land alone was more than 3,850 terabytes (TB) (the data volume required for processing MODIS atmosphere imagery was much smaller: about 424 TB). After processing, MODAPS sent more than 565 TB of land imagery and about 14.41 TB of atmosphere imagery to GIBS.

“At first, we thought it would be about spring 2018 when we would get caught up in processing all the MODIS imagery,” Hoffman says. “We got lucky during this processing when an extra machine was freed up. We were able to use this extra machine and double down on the processing. In fact, we were able to squeeze in a third machine in the last month. Using these three machines enabled us to [process more data and] meet the pie-in-the-sky goal of finishing this processing in early December [2017].”

Even after MODAPS finished processing the imagery, the data still had to be added to the GIBS collection. “Just ingesting the MODIS data took [the GIBS team] an extra month, and then they had to do an analysis and assessment of the data,” says Hoffman. “There are still a few small imagery gaps that we’re working on, but it’s just one image here, one image there.”

As Dr. Gassó notes, the ability to have an easily accessible historical perspective dating back almost two decades greatly facilitates research. “[Back] in the 80s and 90s, if you wanted to look at, say, clouds off the coast of California, you would have to figure out the time of year when it was best to look at these clouds, then place a data request for a specific window of days when you thought the satellite overflew the area,” he says. “You would get a physical tape with these images and have to put this into the processing system. Only then would you know if the image was usable. This process used to take from days to weeks. Now, you can look at images for days, weeks, and even years in a matter of minutes in Worldview, immediately find the images you need, and download them for use. It’s fantastic!”

For the MODAPS, GIBS, and Worldview teams, the completion of this effort gives MODIS users access to a tremendous resource that enables studies into our changing planet reaching back almost 20 years, including the effects of urbanization, historic storms and natural events, and, of course, ongoing changes to Mar Chiquita. “This is really an impressive chunk of data considering the wide range of research scientists can use these data for,” says Hoffman.

Boller agrees, and acknowledges that finally having all daily global MODIS imagery in GIBS is the fulfillment of a long-standing desire—the MODIS past finally reaching the present. “It has been rewarding to see how excited our users are when we release new imagery or extend the imagery timeline back another few years,” he says. “Now, to be able to go from the very start, the very first image, to the present and move forward provides a sense of completeness and the potential for new discoveries.”

See for yourself, and use Worldview to see your world your way by interactively exploring almost 20 years of change as observed by MODIS.