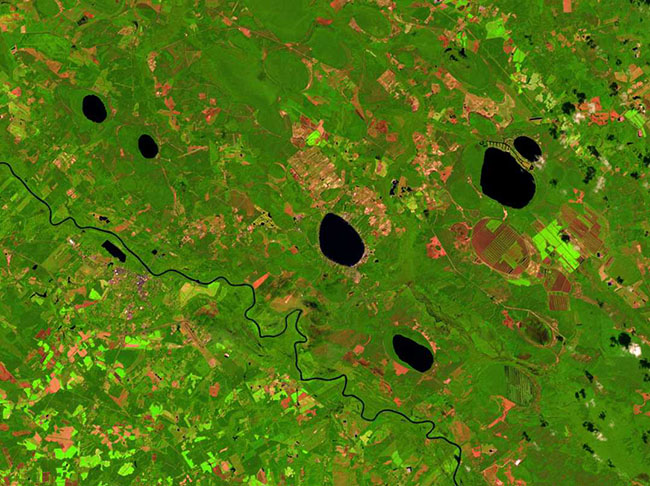 Lakes are the primary source of irrigation and drinking water in many parts of the world. They are used to provide food and generate electricity. They can also lessen the impact of flooding due to natural disasters, and they provide habitats for fish, plants, and other wildlife.

Lake Observations by Citizen Scientists and Satellites (LOCSS) is an effort to better understand how the water volume in lakes is changing. LOCSS is working with a network of citizen scientists who report lake height by reading simple lake gauges. LOCSS also uses satellite images to measure the surface area of the lake. By using the measured lake height and lake surface area, researchers can understand and calculate the volume of water in a given lake, understand how the lake volume is changing over time, and predict how those changes in lake volume may impact humans and wildlife. However, this data will need to be validated with ground measurements. LOCSS creates a framework to provide such measurements.

There are tens of millions of lakes in the world, but only a fraction are monitored. This project uses the power of citizen science to gather large amounts of lake volume data that a single research team would be unable to obtain. These lake volume measurements will help NASA prepare for the upcoming Surface Water and Ocean Topography (SWOT) satellite mission. SWOT will be able to measure lake height and surface area simultaneously allowing for global measurements of lake water storage. However, this data will need to be validated with ground measurements.

During the prototype phase, the project focused on lakes in North Carolina. In the implementation phase, LOCSS will expand the project to new lakes including those in Washington, Wisconsin, Bangladesh. For information on how you can volunteer visit the LOCSS site.

One of the first installations of the implementation phase saw gauges installed in Northeastern Bangladesh at water bodies called "haors." The local partnering institutions for this project are the Bangladesh Water Development Board and Hydrometerology Research and Consulting. 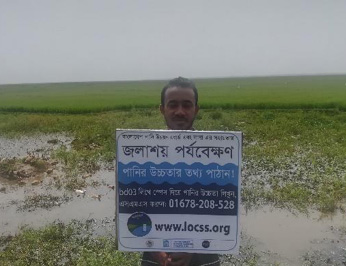 From the months of April through October, thousands of km2 of low-elevation land is inundated with transboundary runoff generated by the monsoon rains from mountains in India in the Assam province. These water bodies become a productive fisheries ecosystem for six months. As the waters recede in the post-monsoon season, the soil becomes rich in nutrients and organic matter. The land is then primed for rice cultivation from groundwater. Rice cultivation during this season, known as the Boro season, is critical to food security of Bangladesh.

Although the extent and duration of inundation are well known, the volume of water storage and changes through the system of haors are not well known. Through the citizen science project, the team is quantifying the seasonal surface water storage component of the water cycle. This understanding may one day inform policy decisions for managing post monsoon water availability, pre-monsoon flash floods and rice cultivation.

The LOCCS project reached several milestones in 2019, including engaging the 1,000th citizen scientist and receiving the project's 3,000th lake height measurement. The team added 37 new study lakes, bringing the total to 62. In doing so, they expanded the project to two new states, Illinois and Massachusetts, in addition to nearly doubling the number of study lakes in Washington. They also began studying lakes outside of the United States for the first time and are now studying four lakes each in Bangladesh (in collaboration with the Bangladesh Water Development Board) and France.

Google Earth Engine software was used in the prototype phase to automatically calculate lake surface areas and tested in Washington and Wisconsin lakes. Limitations related to topography and vegetation were identified, however, so a new algorithm was developed based on USGS Landsat Digital Surface Water Extent (DSWE) product. A paper on using a combination of DSWE and ESA Sentinel 1 and 2 data to identify lake area variations in Bangladesh is currently in preparation.

LOCSS has also developed a prototype app for the project. The app is in revision currently to improve the user interface and provide more functionality. The expected release date is prior to AGU’s Fall Meeting 2019.