Who uses NASA Earth science data? Brian Conway, to monitor land subsidence and the impacts of this on Arizona’s water resources 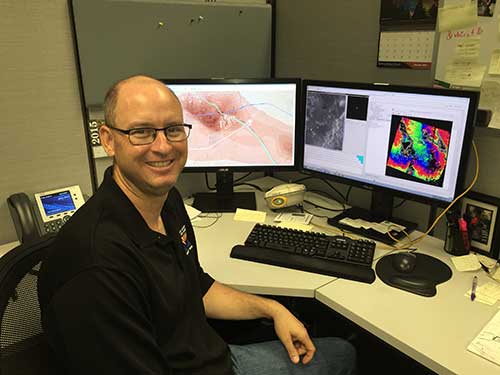 Brian Conway, hydrologist and supervisor of the Geophysics/Surveying Unit with the Arizona Department of Water Resources

Work and research interests: Brian Conway spends his days monitoring the sinking of Arizona. The area Conway monitors, which is mainly in south-central and southern Arizona, has been sinking since the mid-1900s. In fact, the elevation of some areas of Maricopa and Pinal Counties in south-central Arizona has decreased more than 5.5 meters (18 feet) over more than 60 years—an amount slightly less than the height of a two-story building. This is generally due to the compaction of the sub-surface alluvium, which is a mixture of clay, silt, sand, and gravel. As the groundwater within the alluvium is removed through pumping for agriculture, development, and other uses, the pore spaces in the alluvium collapse, leading to a lowering in land elevation. This lowering is referred to as land subsidence. Subsidence also can lead to earth fissures, or hairline cracks that grow and widen as surface water erodes material from the sides and bottom of the earth fissure. Some earth fissures can be more than 10 meters (33 feet) deep and several meters wide. Land subsidence and earth fissures cause millions of dollars in damage to private property and infrastructure (such as roads, railroads, canals, pipelines, and bridges), and can lead to changes in drainage patterns and weaken water retention features like dams and levees. Conway has been monitoring land subsidence in Arizona since joining the ADWR in 1999, shortly after the start of the ADWR land subsidence monitoring program. The Arizona land subsidence monitoring program is mandated by state statute.

An important technology Conway uses to monitor land subsidence is synthetic aperture radar (SAR), which uses radar pulses to produce high resolution images of the Earth’s surface 24/7. By comparing images of an identical area captured days, months, or years apart, slight shifts in the land surface on the order of centimeters or millimeters can be observed. This technique, called interferometry, uses interferometric synthetic aperture radar (InSAR) images to depict these small land changes as colored fringes on an image called an interferogram. An interferogram shows the location of subsidence and allows you to estimate the magnitude of subsidence based on the number of complete fringe cycles. Conway supplements InSAR images with global navigation satellite system (GNSS) data, which provide pinpoint measurements of locations anywhere in the world. He also uses relative and absolute gravimeters to monitor aquifer storage changes. Gravimeters are instruments used to measure local gravitational fields. These gravitational fields are affected by changes in the amount of water contained in aquifers, and measurements of these gravity changes provide information about aquifer water resources. Finally, Conway uses depth-to-bedrock modeling and aquifer storage estimates to keep track of Arizona’s water resources.

Current research focus: Conway uses InSAR and GNSS data to determine the spatial extent, magnitude, and rate of historical and current land subsidence. The majority of the InSAR data that ADWR collect, process, and analyze are for areas in south-central and southern Arizona, which is at the northern edge of the Sonoran Desert. This region is home to not only Phoenix and Tucson, the two largest cities in the state, but also the location of extensive agriculture. This combination of high water demand and low annual precipitation leads to significant areas of subsidence.

Conway also monitors aquifer storage using gravimeters to acquire micro-gravity measurements, which provide data about aquifer storage and dynamics. Since 1999, he has focused this research in the Pinal and Phoenix Active Management Areas in the central and south-central areas of the state. These data, along with depth-to-groundwater data, are used by ADWR’s groundwater modelers for the calibration and validation of models describing water resources.

Research findings: A comparison of historical InSAR data with more recent data shows that land subsidence rates have decreased between 25% and 90% in groundwater active management areas where imported Colorado River water has been used to offset groundwater pumping. As a result, groundwater levels in these areas have been recovering since the mid 1990’s. In addition, areas that are either outside groundwater active management areas or that do not have access to imported Colorado River water to offset groundwater pumping are experiencing increased land subsidence rates as much as three to four times higher when compared with historical InSAR data.