NASA’s Earth Science Data and Information System (ESDIS) Project launched the Cumulus effort to develop a scalable cloud-based platform using Amazon Web Services (AWS) to ingest, archive, distribute, and manage Earth science data in NASA’s Earth Observing System Data and Information System (EOSDIS) collection. Cloud computing has enabled both EOSDIS Distributed Active Archive Centers (DAACs) and Earthdata users to handle a large collection of data by scaling out resources in an unprecedented manner. Infrastructure as a service (IaaS) along with function as a service (FaaS) in cloud computing has accelerated the movement of data management from on-premise to cloud for both DAACs and users. As cloud computing technology advances, the demand for analysis-ready data (ARD) that work well with large scale data analytics solutions in the cloud has increased.

Earth science data are geospatial in nature. According to the Geospatial Data Abstraction Library (GDAL) Enhancements for ESDIS (GEE) Assessment, however, many Earth science data products (e.g., data from the Measurement of Pollution in the Troposphere (MOPITT) and Clouds and the Earth’s Radiant Energy System (CERES) instruments, to name two) are difficult to access and use within commercial off-the-shelf (COTS) and open source geographic information systems (GIS) software, such as Esri’s ArcGIS and the open source QGIS software. 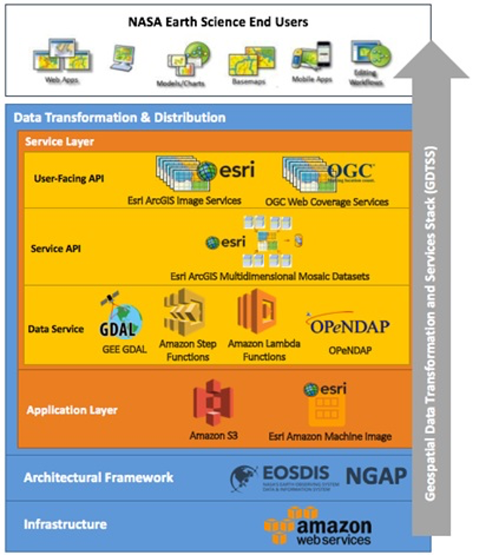 According to the 2018 EOSDIS American Customer Satisfaction Index (ACSI) survey, ArcGIS is the most used software tool/package for working with NASA Earth science data (64%). Use of ArcGIS is followed by QGIS (42%), ENVI (32%), and Excel (29%).

This project developed geospatial data transformation plugins that can be used within the ESDIS Cumulus environment to serve out transformed MOPITT and CERES data products as Open Geospatial Consortium (OGC) WCS and Esri ArcGIS Image Services that easily can be consumed into COTS GIS software such as ArcGIS and QGIS. These plugins perform the transformation to fix any data issues (e.g., incorrect image sizes, orientation, multidimensional variable interpretation, georeferenced metadata recognition, etc.) and this extensible framework can be further expanded to add new plugins as additional issues are identified and addressed. These geospatial data transformation plugins will remove the barrier of transforming each NASA data product after download since it will be correctly served, leading to more easily accessible NASA data products by the Earth science community.

This project utilizes AWS Step Functions and Lambda Functions that also are utilized in Cumulus.

One of the major functions of this proposal work was to develop a series of lambda functions that can easily be linked together within AWS Step Functions. These can then be used as Cumulus Workflows. Currently, there are 12 developmental lambda functions utilizing the Serverless Framework covering a variety of different transformation options.

In addition, the team implemented two lambda function layers that allow the version control of GDAL libraries used in the lambda functions and save time and space for deploying commonly used libraries like NetCDF-4 for Python.

The team successfully created a complete lambda-to-lambda workflow that generated a Geoserver Mosaic dataset from a MOPITT Level 3 product. The workflow was triggered from a granule being placed in an S3 bucket and transformed into a new file format and written to the Geoserver Mosaic. The mosaic was served as an OGC Web Coverage Service from Geoserver and verified with QGIS that the time information was stored correctly within the AWS Remote Database Service (RDS).

The team also successfully chained several of the new lambda functions into an AWS Step Function that launches an AWS state machine. This serverless-based workflow makes a web service call to OPeNDAP Hyrax to retrieve a CERES SYN1Deg data product. The final result is a raster mosaic management script on the EC2 instance and the update of an ArcGIS Image Service.

Numerous products were developed and deployed over the course of this project: