Tropical cyclones are one of the biggest threats to life and property. They include a number of hazards that can cause significant impacts, such as storm surge, flooding, extreme winds, tornadoes, and lightning. Over the past 50 years, tropical cyclones have killed more than 779,000 people and caused $1.4 trillion in economic losses worldwide, according to the World Meteorological Organization (WMO). The 2020 Atlantic hurricane season had an unprecedented 30 named storms, marking the fifth year in a row with above-average hurricane activity.

Terminology for these massive storms differs depending on the ocean basin in which they form:

The Cyclones Data Pathfinder directs users to NASA datasets that can aid in pre-storm, near real-time, and post-storm assessment. The pathfinder also provides access to tools and applications for discovering, visualizing, and working with NASA Earth Observing System Data and Information System (EOSDIS) data related to tropical cyclones.

The Tropical Cyclones Toolkit is designed as an entry point for accessing NASA Earth science data resources. This toolkit contains links to datasets, tutorials and how-tos, feature articles, and Data User Profiles, as well as other useful information related to tropical cyclonic storms and is a great place to start if you're new to working with NASA Earth observing data and resources.

Worldview and the Worldview Image of the Week Archive 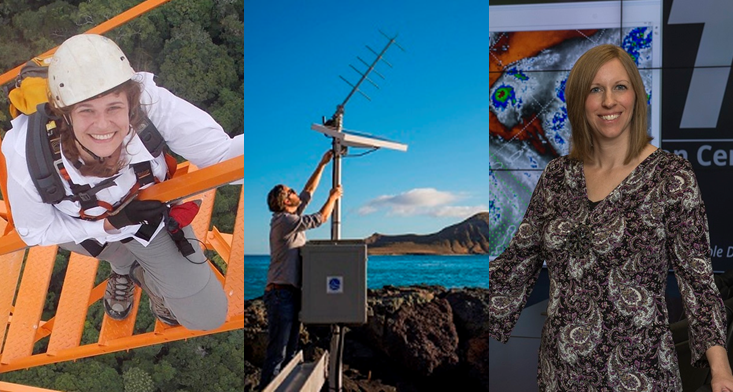 Along with all the great data freely available through Earthdata Search and NASA's Distributed Active Archive Centers (DAACs), dozens of Earthdata articles provide a wealth of background about tropical storms, missions collecting data related to these storms, and how these data are being applied. Data User Profiles show how individual scientists and researchers are using EOSDIS data to explore the science behind these storms. Additional disaster-related articles are available on the Earthdata Disaster Articles page.

Data in Action- The 2020 Atlantic Hurricane Season: A Record Breaker
The 2020 Atlantic hurricane season was record-setting, including the most named storms as well as the most expensive in terms of property damage. Additionally, it was the fifth consecutive season since 2016 with an above-average number of storms.

Data in Action- A Tale of Two Hurricanes in the Gulf of Mexico
A unique event was observed in the Gulf of Mexico at the end of August 2020: Two tropical cyclones occurring rapidly and close to one another. This led to a significant response in sea surface temperature, with waters approximately 2°C cooler compared to normal conditions across the entire eastern Gulf of Mexico.

Improving Hurricane Forecasts with Near Real-Time Imagery and Data
Scientists at NASA's Short-Term Prediction Research and Transition Center (SPoRT) use near real-time data to help the operational weather community with hurricane forecasting.

From TRMM to GPM: The Evolution of NASA Precipitation Data
NASA’s global precipitation data and data processing systems have come a long way from the launch of the Tropical Rainfall Measuring Mission (TRMM) in 1997 to the ongoing Global Precipitation Mission (GPM).

The researcher, the reef, and a storm
Can marine reserves protect Earth’s underwater nurseries?

NASA Earthdata Webinars span the Earth science disciplines and are designed to help users learn about NASA Earth observing data, services, and tools and show users how to work with these resources.