Dust storms can have an impact on human health, weather patterns as well as cause disruption through flight delays and the closure of highways. Data from NASA's Land, Atmosphere Near real-time Capability for EOS (LANCE) are used to monitor and predict dust storms. This information is used by agencies within the Department of Defense to improve resource allocation in remote areas and help promote aircraft safety.

Aerosol Optical Depth (AOD) (or Aerosol Optical Thickness) indicates the level at which particles in the air (aerosols) prevent light from traveling through the atmosphere. Aerosols scatter and absorb incoming sunlight, which reduces visibility. From an observer on the ground, an AOD of less than 0.1 is “clean” - characteristic of clear blue sky, bright sun and maximum visibility. As AOD increases to 0.5, 1.0, and greater than 3.0, aerosols become so dense that sun is obscured. Sources of aerosols include pollution from factories, smoke from fires, dust from dust storms, sea salt, and volcanic ash and smog. Aerosols compromise human health when inhaled by people, particularly those with asthma or other respiratory illnesses. Aerosols also have an effect on the weather and climate by cooling or warming the earth, helping or preventing clouds from forming. Since aerosols are difficult to identify when they occur over different types of land surfaces and ocean surfaces, Worldview provides several different types of imagery layers to assist in the identification.

MODIS and VIIRS Corrected Reflectance imagery are available only as near real-time imagery. The imagery can be visualized in Worldview and Global Imagery Browse Services (GIBS). 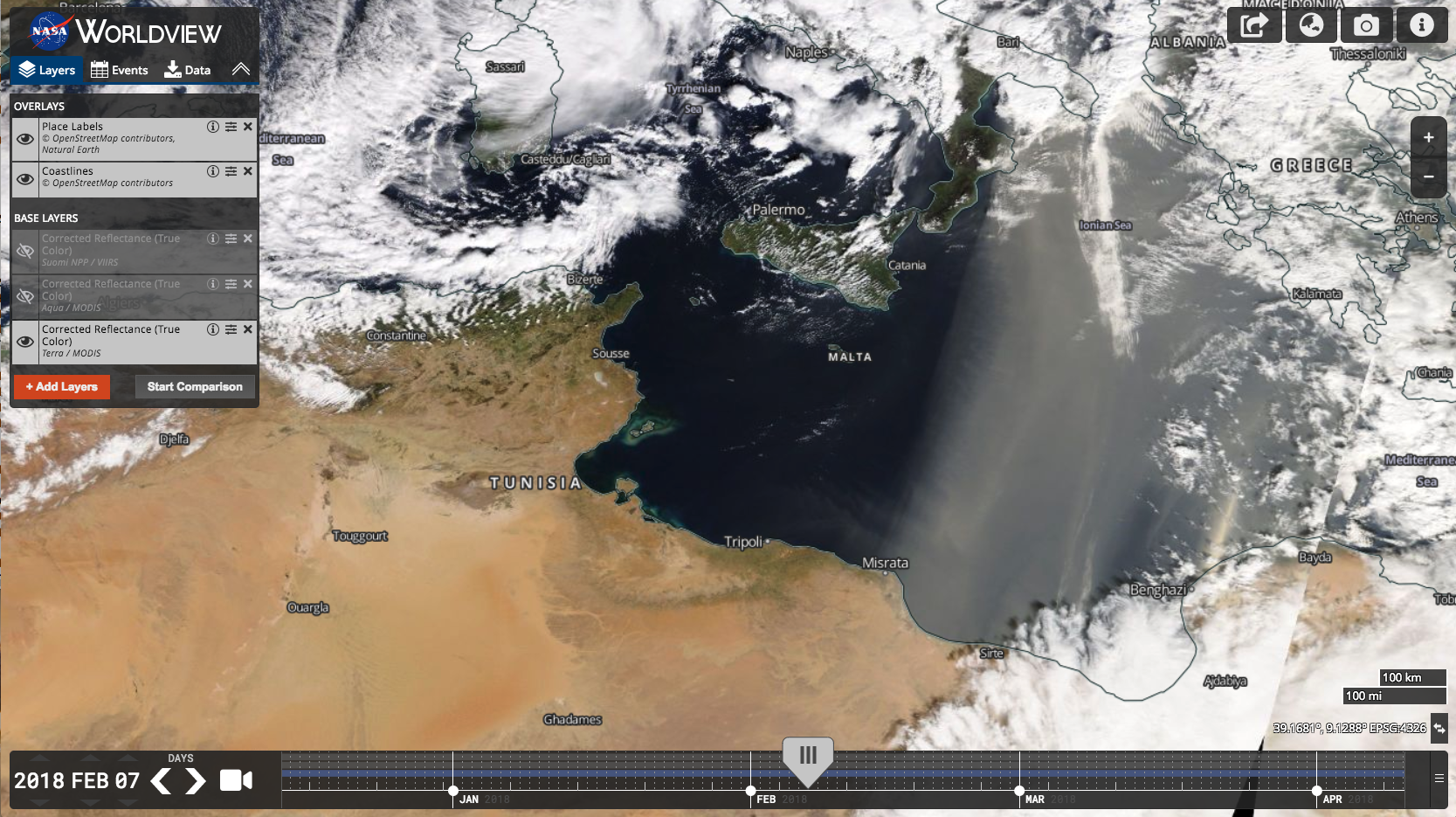 As described in an article from NASA's Earth Observatory, on February 7, 2018, the Moderate Resolution Imaging Spectroradiometer (MODIS) on the Terra satellite acquired this image of dust from the Sahara blowing over the Mediterranean Sea toward southern Europe.

According to news reports, the dust was carried by winds known as the scirocco. (In North Africa, these same desert winds are known as “chrom” (hot) or “arifi” (thirsty). The warm, dry air mass begins over the Sahara, picks up moisture over the Mediterranean, and moves north toward areas of lower pressure along the coasts of Europe.