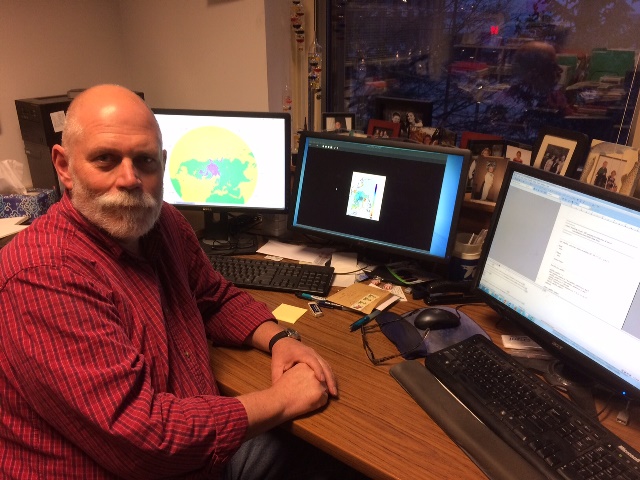 Research interests: Water is an incredible substance. It exists in three separate states—solid (frozen), liquid, and gas (water vapor)— and can change from one state to another at normal Earth temperatures. This is especially true in the atmosphere, where water vapor rises, cools, condenses back into a liquid, and then (if chilled enough) re-freezes back into a solid.

Dr. Mark Anderson’s research looks at how frozen precipitation (snow and ice) forms and falls through the atmosphere and how frozen surfaces react to atmospheric conditions. This research has important implications in areas that undergo seasonal periods of melting and re-freezing, such as the open waters of the Arctic.

As surface ice in the Arctic starts to melt in the spring, the crystalline structure of the ice changes. This structural change can be detected by passive microwave sensors carried on orbiting satellites, such as the Advanced Microwave Scanning Radiometer-Earth Observing System (AMSR-E) instrument aboard NASA’s Aqua satellite. The dates that sea ice begins to melt and break apart, along with when this water begins to re-freeze, impacts global climate, sea level, and, through the availability of shipping lanes, commerce. Remotely-sensed data from Earth observing satellites are a key tool Dr. Anderson uses for determining when snow or ice-covered surfaces are melting and the start of this melting and re-freezing.

Current research focus: Dr. Anderson is studying whether ice surfaces in the Arctic Ocean and surrounding northern hemisphere bays and seas are melting earlier than before, how much the date of first melt has changed over time, and how rapidly the onset of first melt may be changing.

Since 1979, remotely-sensed passive microwave ice melt data have been collected by instruments on various satellite platforms. Along with AMSR-E, these instruments include the Scanning Multichannel Microwave Radiometer (SMMR) on the Nimbus-7 satellite and the Moderate Resolution Imaging Spectroradiometer (MODIS) instrument on the Terra and Aqua satellites. These data are distributed through the EOSDIS Distributed Active Archive Centers (DAACs), and can be accessed through the National Snow and Ice Data Center DAAC (NSIDC DAAC).

Research findings: Through an analysis of almost 35 years of Arctic microwave data, Dr. Anderson and his colleagues found that there is about a 10-day earlier melt onset than at the beginning of the data collection period. Even more significantly, Dr. Anderson found that regional differences can be greater. For example, the mean melt onset date for the Arctic region is 13 May (±7.3 days). Regionally, mean melt onset varies from 15 March in the St. Lawrence Gulf to 10 June in the Central Arctic. Dr. Anderson’s next steps are to examine the differences in atmospheric conditions for these locations that might contribute to the differences in melt onset along with and the overall changes in atmospheric conditions over time.