How are EOSDIS and LANCE Products and Services? Very Good, According to Our Users

The EOSDIS and LANCE continue to maintain high levels of customer satisfaction with products and services based on results from the 2014 American Customer Satisfaction Index (ACSI).

NASA's Earth Observing System Data and Information System (EOSDIS) and Land, Atmosphere Near real-time Capability for EOS (LANCE) continue to provide high levels of customer satisfaction with their products and services, according to results from the annual American Customer Satisfaction Index (ACSI) survey. 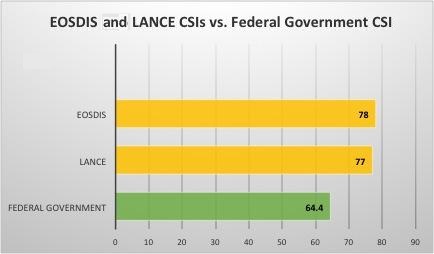 The EOSDIS and LANCE surveys help identify areas that NASA can leverage across the EOSDIS Distributed Active Archive Centers (DAACs) and through LANCE to continually improve customer service and products. Both surveys were conducted online worldwide by the CFI Group, which is an independent organization under contract to the federal government that uses the ACSI survey methodology to track customer satisfaction with more than 100 federal or local government services, websites, and programs.

Along with the formal questionnaire, the surveys also allow respondents to provide open-ended comments. These are some of the most valuable areas of the surveys since they allow respondents to candidly express their specific likes, dislikes, satisfactions, and suggested improvements. These comments help DAAC and LANCE managers identify strengths, highlight areas for improvement, and discover areas for potential new services and products.

(Note that total percentages may not equal 100% in some areas due to multiple responses; all non-percentage values are out of 100) 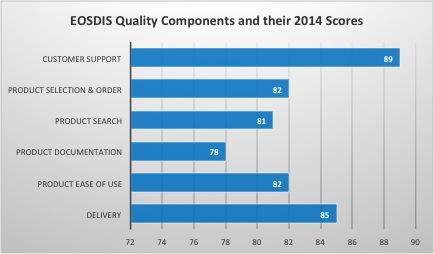 The 2014 survey results show that EOSDIS maintains a consistently high level of customer satisfaction in both services and products. The 2014 EOSDIS CSI of 78 ties with the highest CSI score ever achieved by EOSDIS (78 in 2005).

The CFI Group breaks EOSDIS services into six “Quality Components” representing general areas of performance that drive EOSDIS Customer Satisfaction. Customer Support, which includes the attributes of Professionalism, Technical Knowledge, Helpfulness, and Timeliness, is both the highest rated EOSDIS Quality Component as well as the component with the greatest impact on EOSDIS customer satisfaction.

Slightly more than half (53%) of EOSDIS survey respondents are affiliated with a college or university, either as academic staff or students. Almost all respondents (90%) report using one or more EOSDIS DAACs. The most common areas of data interest in the 2014 survey are consistent with previous years: land and atmosphere, followed by biosphere, ocean, and near real-time (NRT) applications. 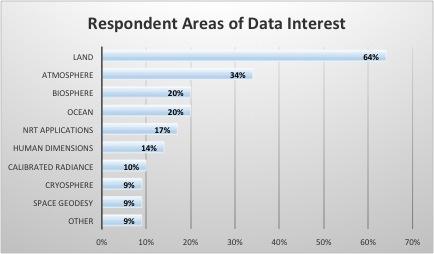 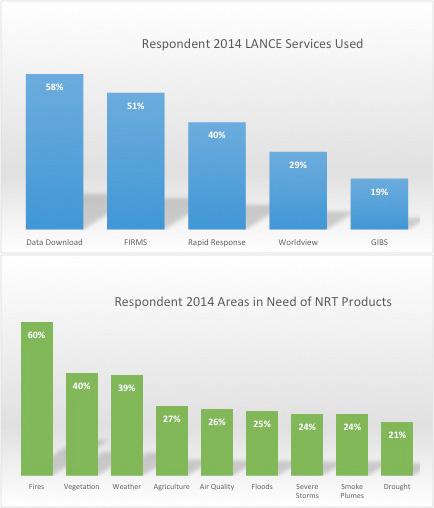 (Note that total percentages may not equal 100% in some areas due to multiple responses; all non-percentage values are out of 100)

2014 is the second year the LANCE survey has been conducted. LANCE NRT products are accessed by respondents in 112 different countries, with more than half of the respondents indicating conservation/natural resource management (31%) and answering science questions/forecasting (25%) as their primary reasons for using LANCE.

In a desire to acquire in-depth metrics for specific LANCE services, the 2014 survey breaks out five key LANCE services for individual evaluation: Global Imagery Browse Services (GIBS), Fire Information for Resource Management System (FIRMS), Worldview, Rapid Response, and Data Download. The two most heavily used services surveyed, Data Download and FIRMS, are a good indication of the value of these NRT data for managing ongoing environmental events, such as wildland fires, crop assessment, and forecasting, especially in remote areas that more easily can be surveyed using sensors aboard satellites. This also is reflected in the areas respondents indicate they most need LANCE NRT data.

Almost all LANCE services surveyed are used on a daily basis by more than a third of respondents. 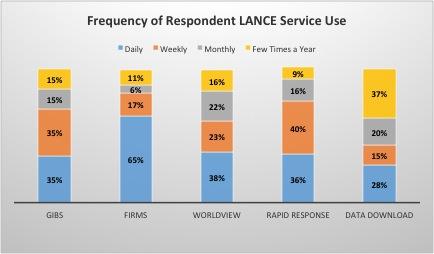 The data from the 2014 EOSDIS and LANCE surveys, including survey comments, are being reviewed by DAAC and LANCE managers, and will play an integral role in service enhancements users will see over the next year. Planning already is underway for the 2015 EOSDIS survey, which will be conducted in the fall. The LANCE survey will not be conducted in 2015.

Summaries of EOSDIS ACSI reports from 2004 to present