Join NASA scientists, researchers, and educators at Union Station in Washington, D.C., for Earth Day 2019 to learn more about our planet. 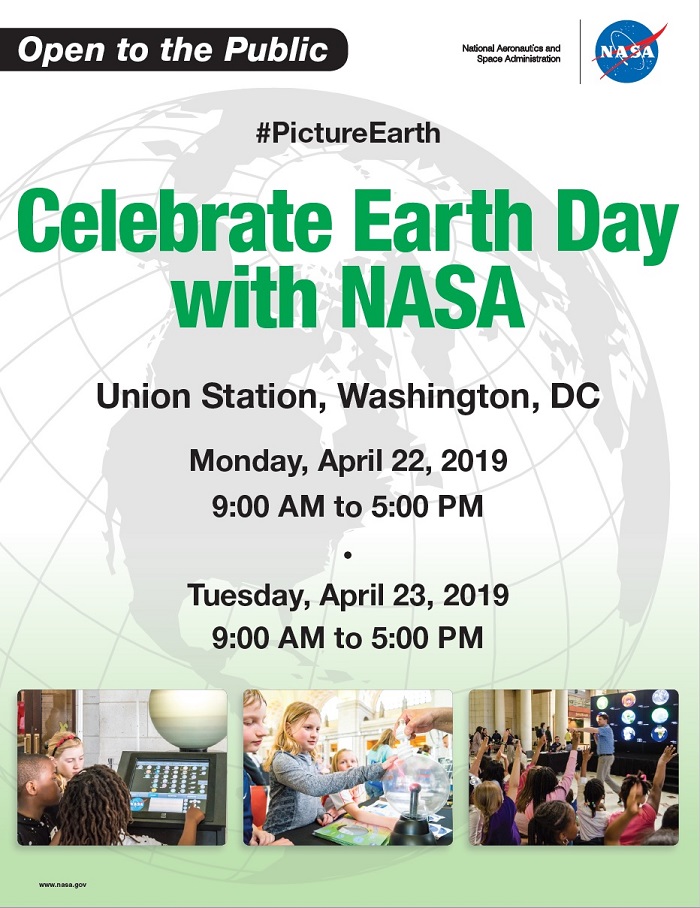 Picture this: NASA’s Earth observing satellites capture images of our planet 24 hours a day, seven days a week, 365 days a year (366 days on leap years). This Earth Day, NASA invites you to participate in the #PictureEarth global social media event on April 22. Plus, if you happen to be in Washington, D.C., you can join NASA at Union Station this Monday and Tuesday to participate in lots of hands-on activities and see how NASA Explores Earth.

Earth Day is observed worldwide every April 22 with the objective of increasing awareness of Earth processes and environmental protection. NASA contributes to this celebration as part of a two-day Earth Day event at Union Station on April 22 and 23. This is your opportunity to learn more about how Earth works and find out how you can explore all the Earth observing resources available through NASA’s Earth Observing System Data and Information System (EOSDIS)—images, data, and all sorts of information that are openly available to anyone on the planet.

Members of the Earth Science Data and Information System (ESDIS) Project (which manages NASA’s Earth observing data) will show you how to use the NASA Worldview visualization application to interactively explore almost 20 years of daily global imagery captured by instruments aboard NASA Earth observing satellites. They’ll also show how you can easily download these images and even make short movies so you can watch a hurricane travel across the ocean or a wildfire spread across a forest.

Other scheduled activities include using augmented reality to “fly” through an amazing cosmic image captured by NASA’s Hubble Space Telescope or driving robot arms to learn how NASA services satellites in space. You’ll also see how NASA’s recently-launched Ice, Cloud,and land Elevation Satellite-2 (ICESat-2) mission is measuring the height of the planet one laser pulse at a time; 10,000 laser pulses a second.

And don’t forget to stop by the #PictureEarth Selfie Station where you can participate in NASA’s worldwide #PictureEarth social media event. NASA wants to see how you picture the planet and invites you to post your best images of Earth (like your favorite local field or an awesome sunset) to social media on April 22 using the hashtag #PictureEarth. Be sure to indicate where your picture was taken in the text of your post. Some of these publicly-shared images (maybe yours!) will be showcased in NASA videos and composite images featuring imagery from fellow explorers around the globe.

To see some incredible examples of how NASA pictures Earth, download NASA’s new Earth photo book that features stunning satellite images (https://earthobservatory.nasa.gov/features/earth-book-2019). Of course, you can always see the latest NASA Earth imagery by visiting the NASA and Earthdata websites.

For NASA, every day is Earth Day thanks to satellites, aircraft, and ground-based systems that constantly collect data about our home planet—along with some amazing pictures. Help NASA #PictureEarth on April 22, and join in the fun at Union Station April 22 and 23!