NASA’s EOSDIS continues to provide high levels of customer satisfaction with its products and services, according to results from the 2016 American Customer Satisfaction Index (ACSI) survey.

For the 13th year in a row, NASA’s Earth Observing System Data and Information System (EOSDIS) received high scores for customer satisfaction with NASA Earth science data products and services on the annual American Customer Satisfaction Index (ACSI) survey. Based on more than 7,100 responses to the global survey, EOSDIS earned a Customer Satisfaction Index (CSI) of 77 out of a possible 100, which represents strong performance. This score is identical to the 2015 score and nearly 10 points higher than the overall federal government 2016 CSI of 68. EOSDIS has never received a CSI below 74 and has consistently outscored the federal government since the EOSDIS ACSI survey was first conducted in 2004. 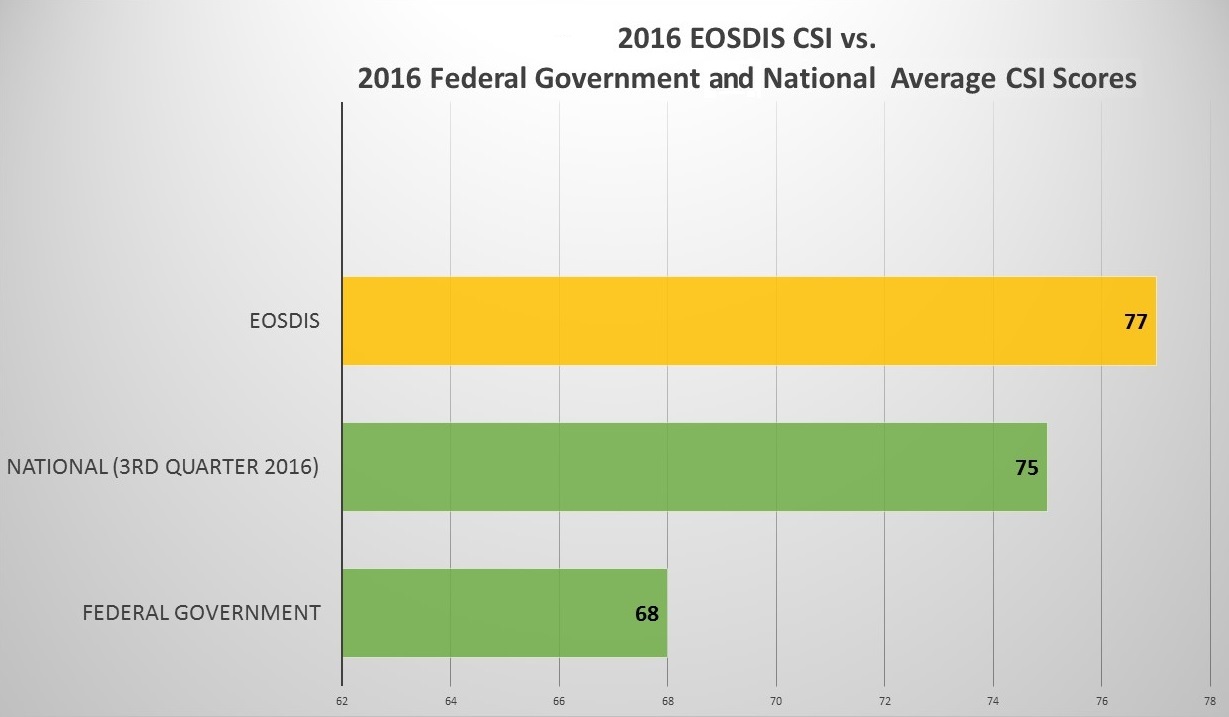 The survey was conducted by CFI Group, an independent organization under contract to the federal government. CFI Group uses the ACSI survey methodology to track customer satisfaction with more than 100 federal and local government services, websites, and programs.

NASA’s EOSDIS provides end-to-end capabilities for overseeing NASA’s Earth observation data. EOSDIS currently archives more than 17.5 petabytes of data and distributes more than 11,000 unique data products. These data represent some of the most complex and diverse Earth science data sets on the planet from sources including satellites, aircraft, field measurements, socioeconomic data, and numerous other programs. The primary services EOSDIS provides are data archive, management, and distribution; information management; product generation; and user support. The Earth Science Data and Information System (ESDIS) Project manages these services, and data are archived, processed, and distributed through the discipline-specific Distributed Active Archive Centers (DAACs). Respondents to the ACSI survey evaluate their experience with the specific DAAC or DAACs from which they receive data and products.

EOSDIS uses the ACSI survey results to continually improve customer service and products available through the DAACs. While the survey is conducted online worldwide each fall by CFI Group, the questionnaire used for the annual survey is developed jointly by EOSDIS and CFI Group.

CFI Group sent out 285,795 invitations to individuals who used EOSDIS data and/or products to take the 2016 survey, which was available from September 7 through October 3. A total of 7,133 responses were received, a response rate of 2.5% (a response rate that allows for valid results, based on the ACSI methodology).

Along with the formal questionnaire, the survey allows respondents to provide open-ended comments. These are some of the most valuable areas of the survey since they allow respondents to candidly express their specific likes, dislikes, satisfactions, and suggested improvements. These comments help DAAC and EOSDIS managers identify strengths, highlight areas for improvement, and discover areas for potential new services and products.

Overall EOSDIS 2016 Survey Highlights (in the following tables total percentages may not equal 100% due to multiple responses; all non-percentage values are out of 100) 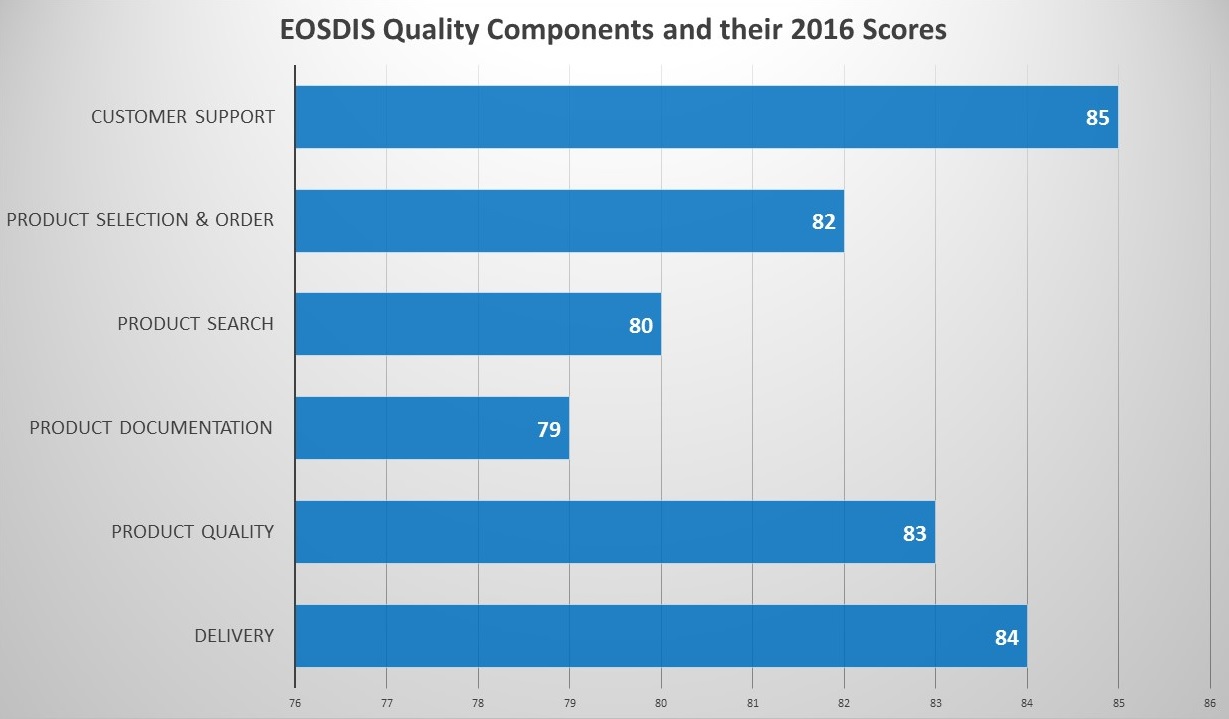 Scores for Product Selection and Order (82) and Product Search (80) remain unchanged from the 2015 survey and represent strong performance. Product Delivery slipped one point from 2015 (from 85 to 84), but still represents a strong score and is considered a strength, according to CFI Group. 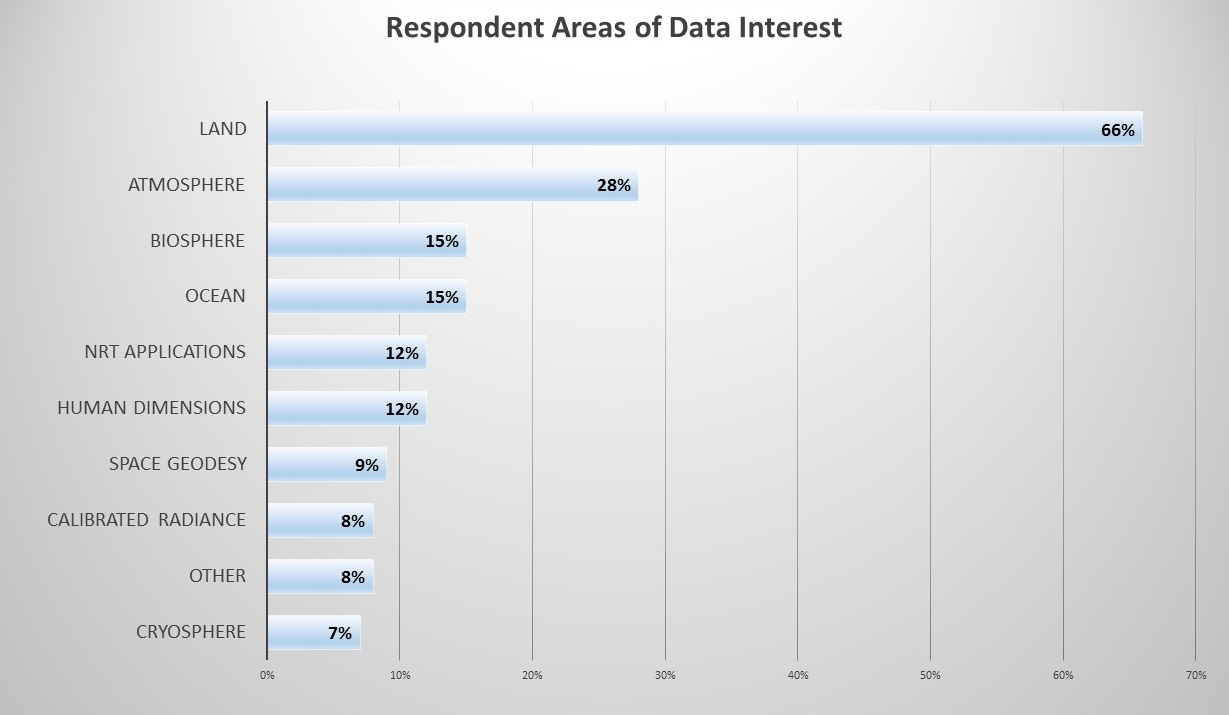 Survey respondents self-identifying themselves as university students (36%) and Earth science researchers (32%) were the most common EOSDIS data users, followed by university professors (16%) and the general public (14%). The most common areas of respondent data interest are consistent with previous years: land and atmosphere, followed by biosphere, ocean, near real-time (NRT), and human dimensions applications.

ACSI survey respondents are asked to evaluate their experience with the specific DAAC or DAACs from which they receive data and products. The Land Processes DAAC (LP DAAC) continues to be the most frequently cited DAAC for evaluation: 40%, up from 38% in 2015. 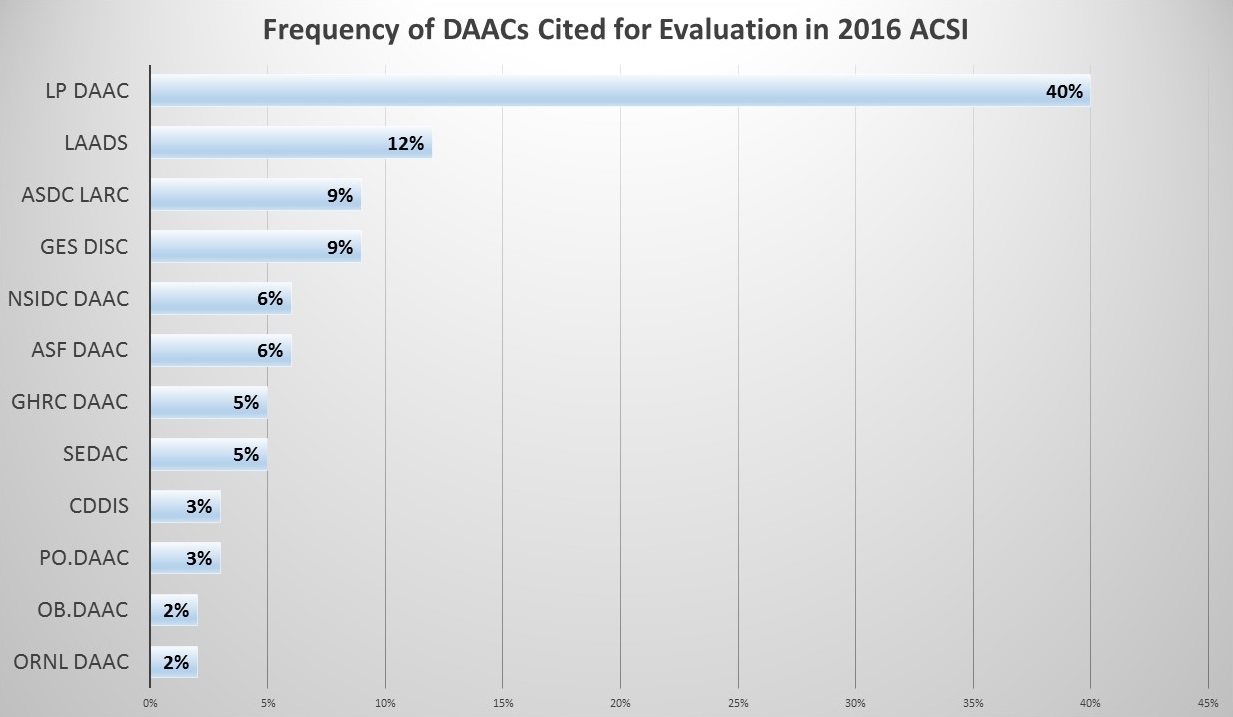 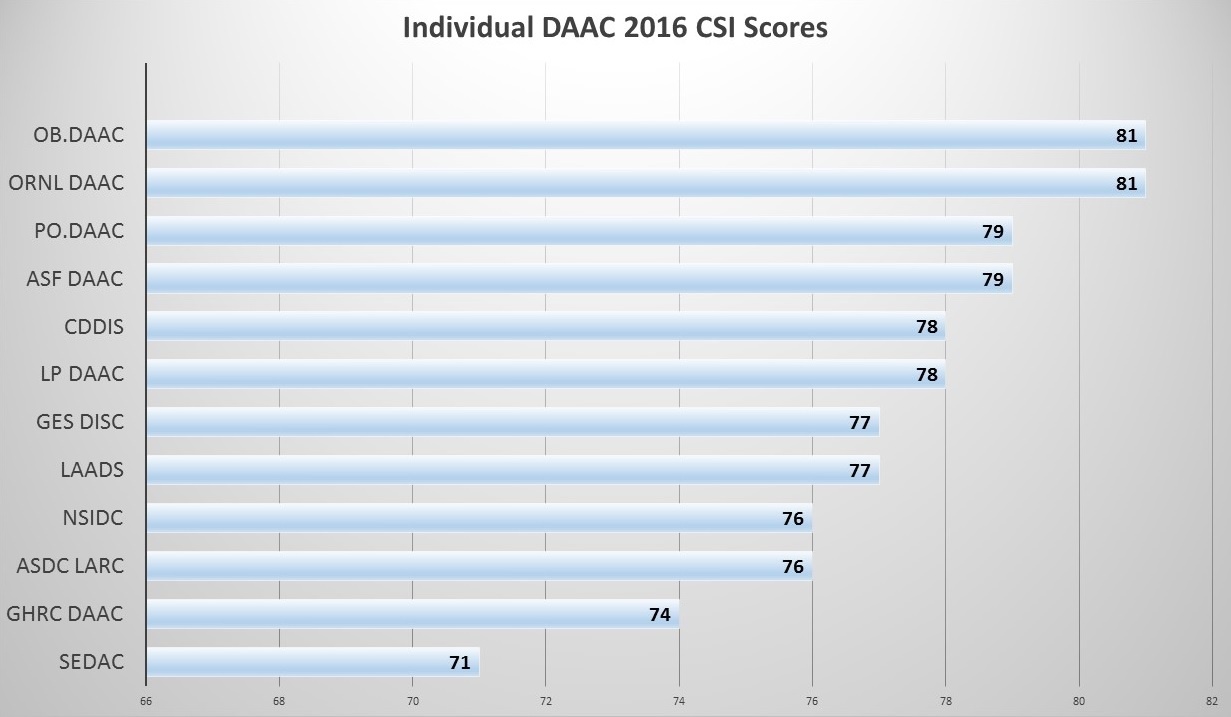 As noted by CFI Group, respondents’ Likelihood to Recommend the DAAC they dealt with to a colleague (87, up one point from 2015) and Likelihood to Use the Services Provided by the DAAC in the Future (88, unchanged from 2015) remain very strong. For individual DAAC scores dating back to the first EOSDIS ACSI survey in 2004, please visit the ACSI Reports page on the Earthdata website.

Next Steps and Additional Information

The data from the 2016 EOSDIS survey, including survey comments, play an integral role in service enhancements users will see throughout 2017. Planning already is underway for the 2017 survey, which will be conducted in the fall.