In June 1997, I-Shou Wang convened the second ever Sino-American Symposium on Human Geography, which brought geographers from around the world to Xi'an, China to facilitate international exchange of research and evaluate Chinese geographer's progress in the field of human geography.

The first Sino-American geography conference, also organized by Wang and held in 1985, introduced the Chinese to human geography. The 1997 symposium revisited the Chinese conception of the disclipline after 12 years of developing research and interest in the discipline.

Wang, a cartographer by trade and a geography professor at California State University, Northridge, used the conference to distribute an atlas he made of the province of Shaanxi in China. He handed out several copies of the atlas and hung a poster-size version of it on the convention wall. 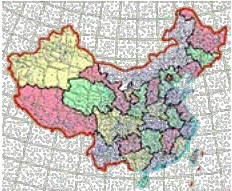 The atlas is the result of Wang's use of information from the Socioeconomic Data and Applications Center. The data set he used, called China Dimensions, presents demographic and geographic information about China in an easily downloadable format on the World Wide Web. Wang used 1990 census data from the site to create the map of Shaanxi.

While Wang could have obtained the 1990 Chinese census data through other avenues, he likes the ease with which NASA's Socioeconomic Data and Applications Center (SEDAC) makes the information available.

"Data are available in China but not in electronic form," he said of the census data. "Nowadays all kinds of data are available (on the Internet) if you want to search for it, so you can save research time."

This idea of using Internet data for geographic research is the message Wang wanted to spread at the last geography conference. The Shaanxi atlas's uniqueness comes from the fact that it was created with information obtained entirely on the World Wide Web. Wang brought it to the symposium to show Chinese geographers the power of the Internet in their profession.

"I wanted to demonstrate the applications of modern technology in research and teaching," he said. "The atlas is a demonstration of how to use information available on the Internet rather than an actual analysis of population."

The Chinese, Wang said, are about five years behind Americans in terms of computer hardware and Internet access. The Shaanxi atlasgives them a glimpse of what is possible.

Wang also uses the atlas in his other capacity—

Wang's next project will be a study of Manchuria and will employ SEDAC's China Dimensions data in a map of the region. The population and economy of Manchuria is changing fast, and Wang will assess the trends in growth and urbanization.

Developed by the China Task Team at the Consortium for International Earth Science Information (CIESIN), the China Dimensions Web site is an informative look at a rapidly changing country.

The site contains data from the 1990 Chinese census, broken down into categories ranging from public health to economics. Also available are maps of the country that show provincial boundaries and maps of each province indicating the boundaries of each country within the province. The site is capable of cross-referencing demographic census data with the geographic map data to provide specific information about any area of China.

The database has been designed to expedite scientific and socioeconomic research on China. Professional researchers and the general public have used the site to obtain up-to-date information on the most populous country in the world. For more information, visit SEDAC's website.