If a wildfire starts in the woods and no one is around to see it, how do you know when it started? Thanks to vector layers in the NASA Worldview data visualization application, the time an active fire or other thermal anomaly was first detected by an orbiting sensor – along with the approximate latitude and longitude of the anomaly, the fire radiative power, the brightness temperature, and much more – is only a mouse click away.

A vector layer is different from an image layer. Image layers represent locations through a grid of cells or pixels with associated color values that, when combined, form an image. Vector layers, on the other hand, identify locations using points, line segments, or polygons. More importantly, vector layers have attribute information that can be examined when a vector feature is clicked. For example, when a vector point is clicked in the Dams layer, a table of attributes appears, including the dam name, river, main use, and representative capacity.

Just because a vector layer is loaded into the Worldview Layer List doesn’t mean the vectors being displayed are active or clickable. If you see the blue pointer icon next to the vector layer in the Layer List on the left side of Worldview, you should be able to click on a colored vector dot to open a window with attribute information associated with that vector.

If you see a gray pointer with a red X over it, however, you are zoomed out too far and the vector layer is being rendered as an image. Simply zoom in until the red X changes to a blue pointer, indicating you can click on the vector dot to open the vector layer attribute information. 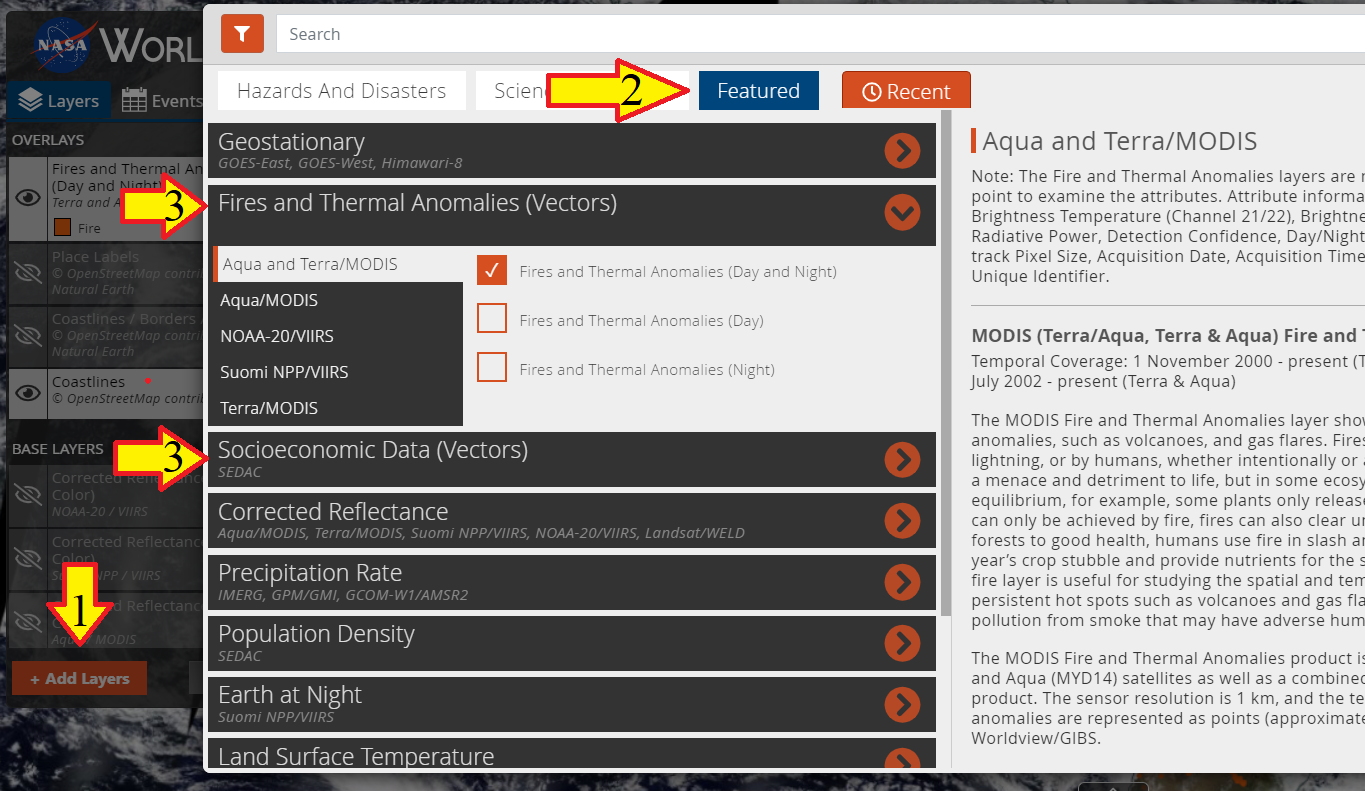 Once you add a vector layer, colored dots appear on the Worldview map indicating the vectors you can select (remember, you might need to zoom in to make the pointer on the vector layer turn blue, indicating that the vector dots are clickable and not part of an image layer). Clicking on a vector brings up a box with the vector information.

Want to add NASA Worldview vector layers to your own client system? Since all NASA data are free and open, the code is yours to use. Check out NASA's Global Imagery Browse Services (GIBS) API for Developers: Vector API documentation and visit the gibs-web-examples GitHub repo to find some live examples.

Thanks to NASA Worldview vector layers, a wealth of information about specific wildfires, dams, reservoirs, and other features is only a click away. See for yourself, and start exploring all the new features of NASA Worldview.