SEDAC releases datasets showing how patterns of socioeconomic development in the era of climate change are likely to impact the spatial allocation of populations around the globe.

Imagine a future wherein global and national institutions have achieved a portion of their sustainable development goals; the health of Earth’s ecological systems is much improved, although some degradation continues; the world consumes 25 percent less fossil fuel and global population growth levels off in 2050, but persistent income inequality continues, leaving some low-income people vulnerable to societal and environmental change.

Next, imagine a second, alternative future in which the world has placed its faith in competitive markets and innovation, resulting in rapid technological progress and development. There is strong investment in health and education, and ecological problems like air pollution are successfully managed at the local and regional levels. At the same time, the push for economic and social development leads to intensive fossil fuel use and the global economy grows, but global population peaks and then declines.

Now, with these two imaginary worlds in your mind, ask yourself: How might the worlds in these two futures differ in terms of greenhouse gas emissions, land use, and population density in urban and rural areas?

These are the types of questions that members of the climate change research community ask themselves as they perform analyses of future climate impacts, the populations and infrastructure that might be vulnerable to them, and strategies for adaption and mitigation. To aid their analyses, the members of this research community created a set of five scenarios (not unlike the hypothetical scenarios described above) known as Shared Socioeconomic Pathways (or SSPs). Established over the last several years in a joint community effort, the five SSPs describe plausible global development patterns leading to different situations for mitigating and adapting to climate change.

Recently, NASA’s Socioeconomic Data and Applications Center (SEDAC), released a collection of datasets offering global, spatial population and urban land projections based on the five SSPs. SEDAC is operated by the Center for International Earth Science Information Network (CIESIN), a unit of the Earth Institute at Columbia University based at the Lamont-Doherty Earth Observatory in Palisades, New York. As part of its mission to synthesize Earth science and socioeconomic data and information in ways useful to a wide range of decision makers and applied science users, SEDAC archives, manages, and distributes NASA Earth Observing System Data and Information System (EOSDIS) socioeconomic and Earth science data, resources, and tools. 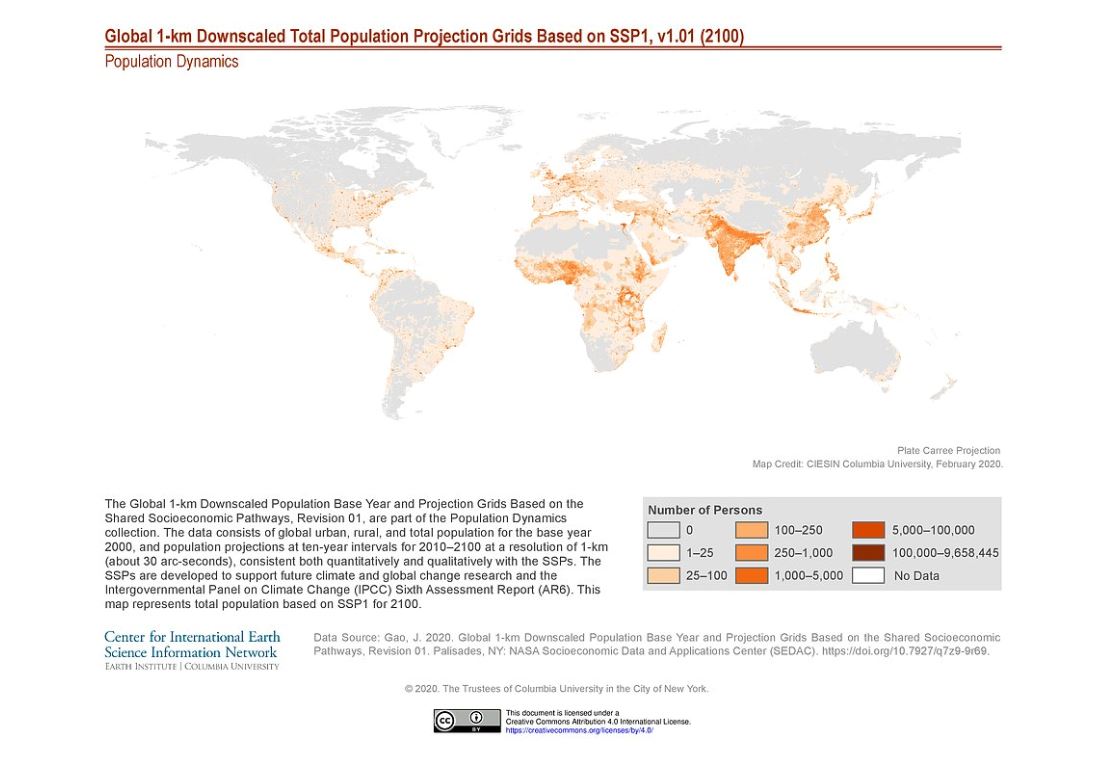 “What’s new or unique about these datasets is that they’re focused on the spatial aspect,” said Dr. Alex de Sherbinin, SEDAC Deputy Manager. “Some [SSP] scenarios suggest high levels of urbanization and more intensive fossil fuel use, while others suggest lower urbanization and maybe lower fossil fuel use. Each of these patterns of socioeconomic development has implications for the spatial allocation of populations.”

According to de Sherbinin, climate change impact and vulnerability studies have typically not provided much detail about how populations might be impacted by the effects of climate change.

“Just knowing that the future population of country X or Y will be so many millions of people based on a SSP doesn’t tell you much,” he said.

However, spatial data products like those from SEDAC that portray how populations may develop over time in various scenarios could help environmental researchers, demographers, state and local decision-makers, and others identify the populations at risk from climate change impacts.

“If a certain area flooded once per hundred years in the past and now it’s going to flood once per decade, and you know that population is growing rapidly because people tend to like to live along rivers or the coast, then the spatial SSP datasets will give you a better, more realistic sense of exposed populations,” de Sherbinin said.

SEDAC’s new spatial SSP datasets pertain to a range of population-related topics, including urbanization and density, and were developed with methodologies created by Bryan Jones of the City University of New York Institute for Demographic Research, and Brian O’Neil of the National Center for Atmospheric Research in Boulder, Colorado. Among them are:

Global One-Eighth Degree Urban Land Extent Projection and Base Year Grids by SSP Scenarios 2000–2100, which provides a set of global, spatially explicit urban land scenarios consistent with the 2000–2100 SSPs. A diverse array of data contributed to this new dataset, including a 40-year global time series of fine-spatial-resolution Landsat images. The purpose of this dataset is to provide global SSP-consistent spatial urban land projections and base year grids based on the SSP data at a resolution of one-eighth degree (7.5 arc-minutes) for use in climate, socioeconomic, environmental, and other fields of research.

Global One-Eighth Degree Population Base Year and Projection Grids Based on the SSPs, v1.01 (2000 – 2100), which consists of global urban, rural, and total population data for the base year 2000, and population projections at 10-year intervals for 2010–2100 at a resolution of one-eighth degree (7.5 arc-minutes), consistent both quantitatively and qualitatively with the SSPs.

Georeferenced U.S. County-Level Population Projections, Total and by Sex, Race and Age, Based on the SSPs, v1 (2020 – 2100), which offers county-level population projection scenarios for the United States in five-year intervals to help researchers understand long-term demographic changes, which in turn can be used by to plan for the impacts of future population growth of decline on infrastructure, resources, and a variety of other areas.

West Africa Coastal Vulnerability Mapping: Population Projections, v1 (2030, 2050), which provides areas in West Africa that may be particularly exposed to climate stressors owing to future high population growth. The dataset is based on an unreleased working version of the Gridded Population of the World (GPW), Version 4, year 2010 population count raster but at a coarser, five arc-minute resolution.

Shared Socioeconomic Pathways (SSPs) Literature Database, which offers biographic information, abstracts, and analysis of 1,360 articles published from 2014 to 2019 that used the SSPs. The database was generated from a Google Scholar search, followed by a manual examination of the results for papers that made substantial use of the SSPs.

Although remotely sensed data are used as inputs in the SEDAC datasets associated with land cover — the Global One-Eighth Degree Urban Land Extent Projection and Base Year Grids by SSP Scenarios, v1 (2000 – 2100) uses a 40-year global time series of fine-spatial-resolution Landsat images — de Sherbinin said population projections are derived from models, which result in more realistic products. He added, however, that “remote sensing will likely become an increasingly important input to modeling in the future.”

As a case in point, de Sherbinin noted that the population modeling now underway for Africa, which includes future climate impacts as well as SSPs, is based on another SEDAC data product that uses remote sensing to focus population distribution into settlements.

The SEDAC SSP datasets can be used as key inputs for researchers performing analyses of land use change, energy consumption, and greenhouse gas emissions. They may also be of value, de Sherbinin notes, to the growing community of users outside the field of climate science, such as urban planners and developers, interested in maintaining current living standards in a more sustainable manner.

“You can imagine some of these data might be useful in projecting out the future electric grid,” de Sherbinin said. “If we’re all going to go to electric vehicles and the population is going to be concentrated in certain areas, you have a much better idea of where that electric grid needs to be built out or where new schools might be needed. Most people aren’t projecting out to 2050 or 2100, but some long-range planners actually are thinking out that far and trying to think about what the implications are.”

To help users make the most of SEDAC’s new data collection, the DAAC offers access to a versatile tool called the SEDAC Map Viewer (v.2), which allows users to select from hundreds of data layers and then view them in single- or four-panel map modes. The four-panel mode allows gives users the chance to visualize related datasets side-by-side and compare and contrast the different projections.

“These tools are available to users to let them explore the data before they download them,” de Sherbinin said.

And de Sherbinin said he expects the SSP dataset collection to grow, which means there will be more for users to explore in the coming months.

“We already have new data that we produced under separate contract for the World Bank for a project called Groundswell, which maps future population distribution under climate change,” de Sherbinin said. “We could do only two of the five SSPs because of time constraints, but we brought in various climate impact data and looked at how populations in different parts of the world might develop, especially in the poorer, more rural areas of the world, where climate impacts are expected to have a direct effect on crop production, water availability, and other things people need for their livelihoods. Those data will be archived and disseminated by SEDAC soon.”

Of course, the future is uncertain and no one can predict what the impacts of climate change will be and who they might affect. However, this uncertainly shouldn’t keep us from planning ahead to meet future needs, de Sherbinin says.

“This gets to the heart of why we project the future. We don’t know everything, but we know some things are likely to happen and so you’re better off reducing the level of uncertainty by using reasonable assumptions.”