Registration is now open for this year’s virtual hackathon, which will take place October 2-3

To mark the 10th annual NASA International Space Apps Challenge — the largest annual global hackathon in the world — NASA is collaborating with nine of its space-agency partners to engage people from around the globe in using NASA’s open data to find innovative solutions to real-world challenges on Earth and in space.

The International Space Apps Challenge was created in 2012 to introduce problem-solvers worldwide to NASA’s free and open data. By participating in Space Apps Challenges, team members learn about NASA’s data holdings and share in the creation and application of the knowledge that results from their efforts. The annual events also encourage collaboration, creativity, and critical thinking, and leverage participants’ interest in space and Earth science to foster the next generation of scientists, technologists, designers, science communicators, and engineers.

This year, NASA and its partners hope to increase participation in the Space App Challenge by working together to bring the event to more communities worldwide. The theme for this year’s 10th annual event is “The Power of Ten,” which commemorates ten years of collaboration, community, and problem-solving among participants from all over the world. 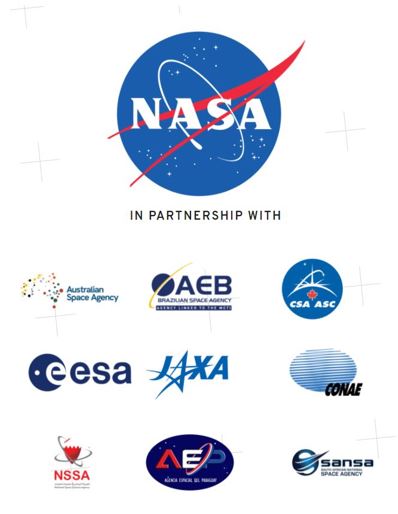 To address the challenges of this year’s event, participants will be provided with resources from NASA and the nine partner-agencies. Participants will also have access to the wide range of data and services freely available through NASA's Earth Observing System Data and Information System (EOSDIS). These include more than 40petabytes (PB) of data at NASA EOSDIS Distributed Active Archive Centers (DAACs) that can be discovered and downloaded using Earthdata Search, satellite-acquired imagery available through EOSDIS Global Imagery Browse Services (GIBS) that can be interactively explored using NASA's Worldview imagery mapping and data visualization application, information and links to data in a variety of NASA Earthdata Pathfinders and Toolkits, and much more.

This year’s hackathon will be conducted virtually, like the event in 2020. Over the weekend of October 2-3, participants from around the world come together over a 48-hour period to solve challenges submitted by NASA personnel. After the hackathon, project submissions are judged by space agency experts and winners are selected for one of several Global Awards. This year, in honor of Space Apps’ 10th year, the 2021 challenge statements will echo the Power of Ten theme and include challenges for participants of all ages and skill levels. This year’s event will also feature a total of 10 Global Awards in several categories, including Best Use of Science, Best Use of Data, Best Use of Technology, Most Inspirational, Best Storytelling, and more.