NASA’s Earth Observing System Data and Information System (EOSDIS) has been a central component of the NASA Earth observation program since the 1990s, providing end-to-end capabilities for managing NASA Earth science data from various sources—satellites, aircraft, field measurements, and various other programs. And although the system has changed substantially over the past 27 years, the global user community’s satisfaction with EOSDIS products and services has remained consistent.

According to the 2020 American Customer Satisfaction Index (ACSI) survey of EOSDIS data, products, and services, EOSDIS received a Customer Satisfaction Index (CSI) score of 79 out of 100, tying the record-high score received on the 2018 survey. This indicates a high level of satisfaction with EOSDIS products and services and, given that the CSI score is an aggregate of several scores (calculated using the proprietary ACSI methodology), scores in the upper-70s represent a “strong” performance, especially when maintained over several years. 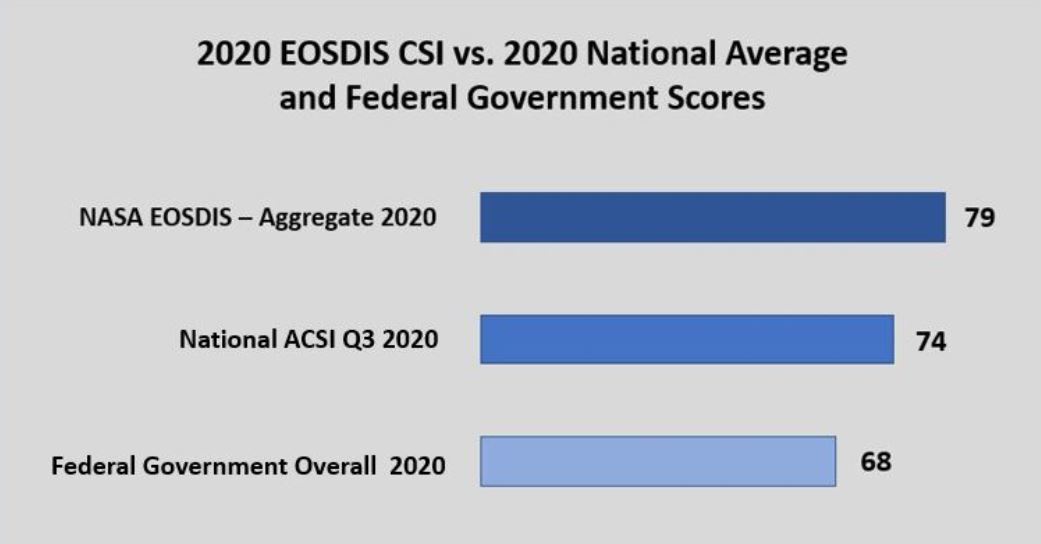 In fact, NASA’s EOSDIS has never received a CSI score lower than 74 since the first EOSDIS ACSI survey was conducted in 2004. As with all previous surveys spanning more than 15 years, NASA’s EOSDIS outscored the federal government, which received an aggregate 2020 CSI score of 68. In addition, CSI scores for EOSDIS Distributed Active Archive Centers (DAACs) ranged from 71 to 83, with an average aggregate CSI of 78.

The results from the annual ACSI survey provide something of a blueprint that the DAACs and NASA’s Earth Science Data and Information System (ESDIS) Project (which manages EOSDIS science operations, including data archival and distribution) can use to tailor their products and services so they better align with and serve user needs.

The ACSI survey is administered by the CFI Group, an independent organization contracted by the federal government to assess user satisfaction with products and services at numerous federal entities. Along with conducting the annual NASA EOSDIS survey, the CFI Group also conducts surveys for the National Weather Service, the General Services Administration, and the U.S. Department of Education, among others.

The ACSI model used by the CFI Group to conduct the annual survey is a set of causal equations linking customer expectations, perceived quality, and perceived value to customer satisfaction, which is reflected numerically in the CSI score. Satisfaction, in turn, is further linked to a customer’s likelihood to recommend products and services and their willingness to use products and services in the future.

Scores pertaining to respondents’ “likelihood to recommend EOSDIS products and services” (87 out of 100) and “likelihood to use EOSDIS services in the future” (88 out of 100) were one point higher than in the 2019 survey (although one point lower than in the 2018 survey). These consistent rankings suggest that, over the years, EOSDIS has consistently provided products and services its users value.

ESDIS, which coordinates and facilitates the annual ACSI survey, opted to use a “long-form” version of survey questionnaire in 2020. One benefit of this longer survey are the more detailed and in-depth questions allowing for a more complete survey of EOSDIS products and services. In all, 9,178 completed surveys were returned in the 2020 vs. 6,337 completed surveys in 2019. This higher response rates lends further credence that the 2020 survey more accurately reflects user satisfaction. Starting with its 2019 survey, the ESDIS Project began alternating short-form surveys with more detailed longer surveys as a way to maintain continuity with questions from longer surveys (e.g., the 2020 survey was a long-form survey; the 2021 survey will use the short-form, and so on.).

The 2020 survey was conducted online between September 21 and October 23. The CFI Group sent email invitations to individuals who used EOSDIS data and/or products. They received 9,178 completed surveys, a significant increase from last year’s 6,337, representing a 1.2% response rate and, according to the CFI Group, a large enough sample size for calculating a statistically valid CSI score.

Outside of three survey questions required by the CFI Group asking respondents to rate their overall expectations, perceived quality, and perceived value of EOSDIS services and products on a 1 to 10 scale (which are used to calculate the CSI score), the remaining questions on the EOSDIS survey asked respondents to evaluate their experience with the specific DAAC or DAACs from which they receive data and products (respondents were allowed to skip questions pertaining to DAACs they did not consult with or contact). The survey also allowed respondents to provide open-ended comments, providing EOSDIS with direct and valuable insights regarding respondents’ likes, dislikes, and thoughts on suggested improvements.

In the following summary tables, total percentages may not equal 100% due to survey questions allowing for multiple responses; all non-percentage values are out of 100. (Click on any image for a larger view.) 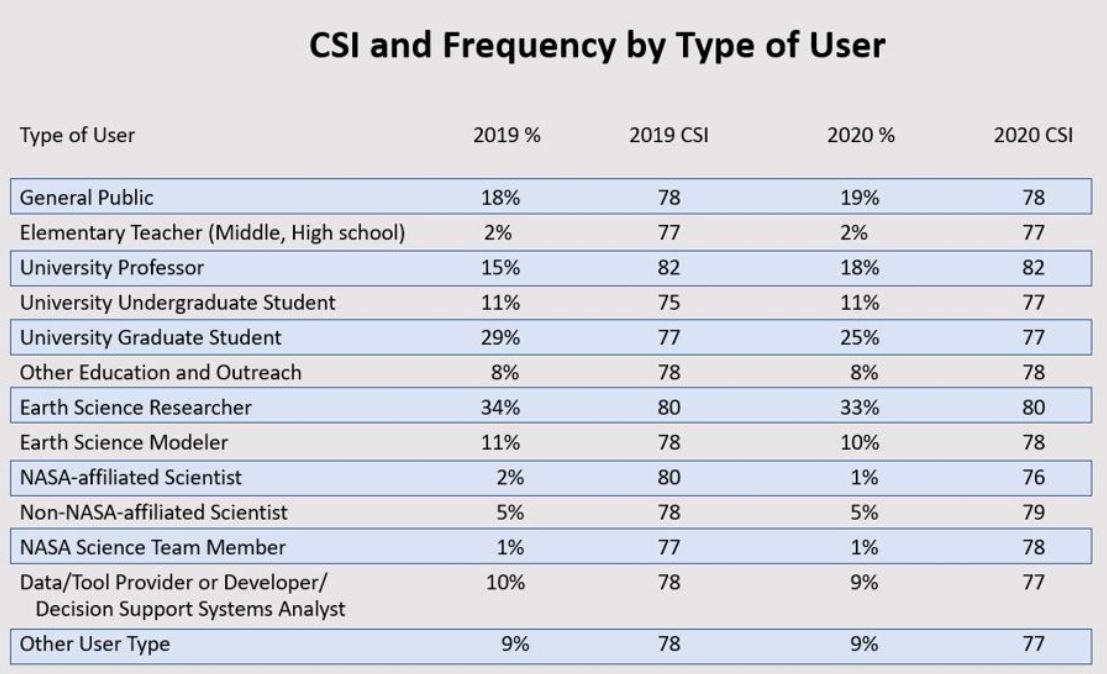 As in past surveys, respondents self-identifying as Earth Science Researchers make up the majority of EOSDIS data users (34%), followed by University Graduate Students (25%) and members of the public (19%). These percentages are similar to those of the 2019 survey, except for in the case of University Graduate Students who comprised 29% of users in 2019, a 4% decrease as compared to 2020. On the contrary, in 2019, University Professors made up 15% of users. In 2020, that number rose to 18%. 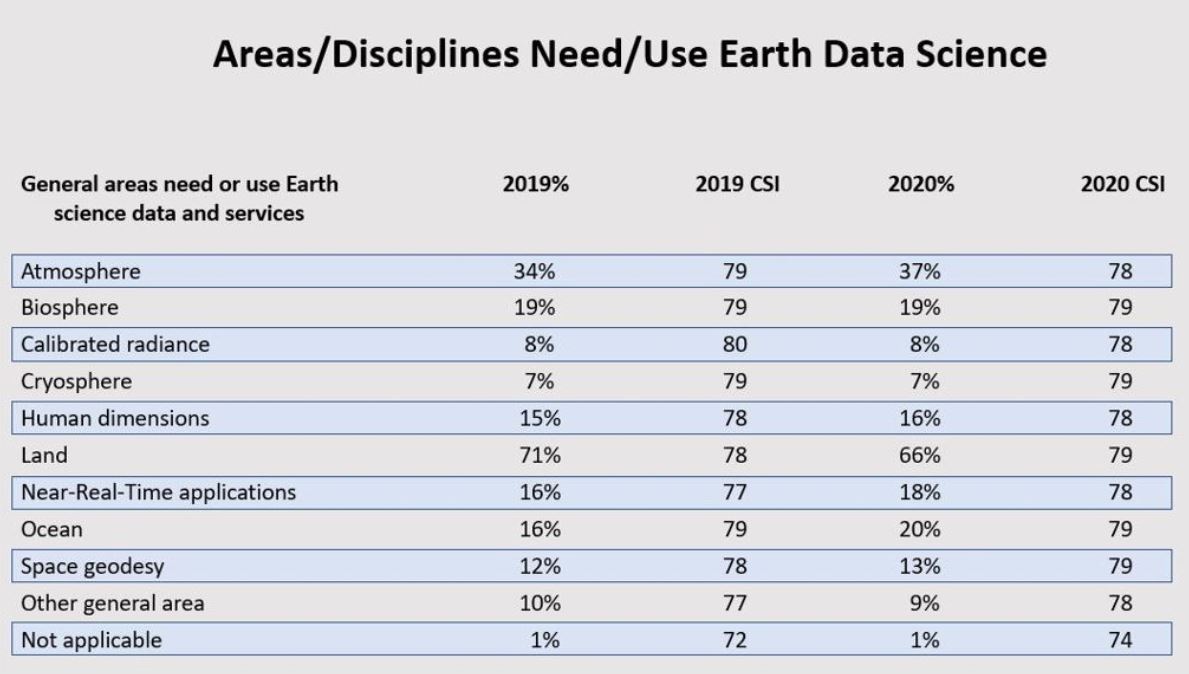 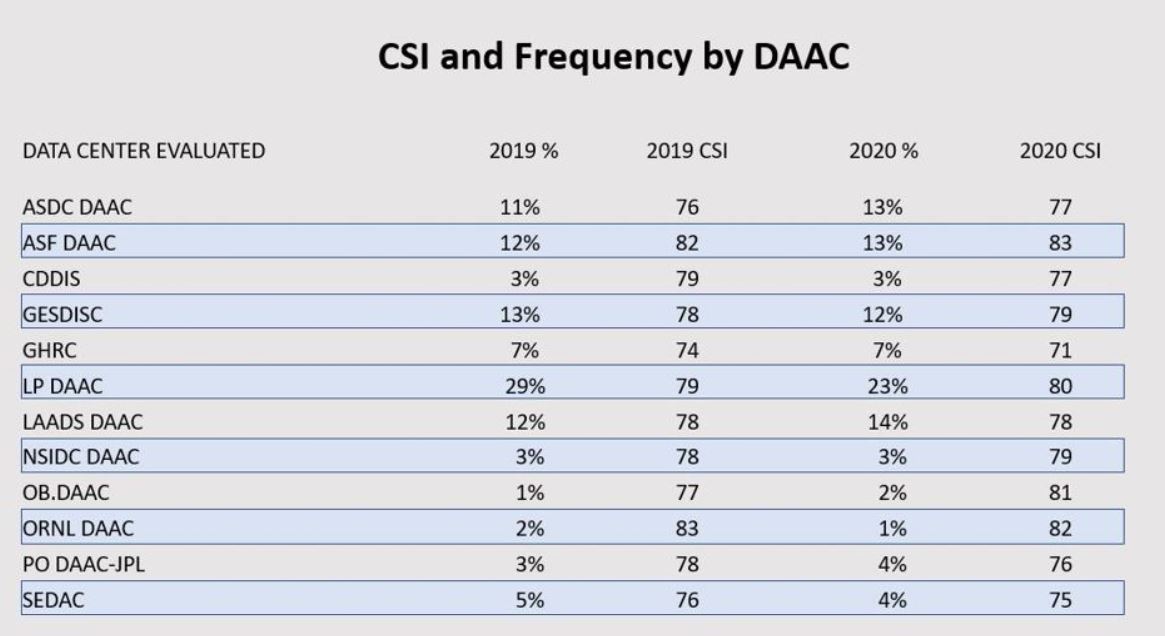 Each year, ACSI survey respondents are asked to evaluate their experience and satisfaction with the specific DAAC or DAACs from which they receive data, products, and services, and CSI scores were computed for each DAAC based on individual DAAC survey responses. All DAACs achieved CSIs between 71 and 83, with a strong average aggregate DAAC CSI of 78. NASA's Alaska Satellite Facility DAAC (ASF DAAC) received the highest CSI score of the 2020 survey (83, based on evaluations from 1,239 respondents), with NASA's Oak Ridge National Laboratory DAAC (ORNL DAAC) and Ocean Biology DAAC (OB.DAAC) receiving the second- and third-highest scores, 82 (based on 125 responses) and 81 (based on 222 responses), respectively. OB.DAAC saw the largest positive change (+5 points) in CSI score between 2019 and 2020.

Would you like to participate in a future ACSI surveys? Anyone who downloads data from an EOSDIS DAAC during the year will automatically be added to the survey list. Users can also visit the DAAC or DAACs from which they acquire data and request that their email address to be added to the list of survey recipients.

Thanks to user participation, the evaluations and comments from the 2020 EOSDIS ACSI survey will enhance existing products and services and spur the development of new ones. And based on the previous 15 years of survey results, users can be assured that the ESDIS Project and the DAACs will continue delivering products and services of the highest quality.

A summary of the 2020 EOSDIS ACSI report, along with summaries of all EOSDIS ACSI surveys dating back to the first survey in 2004, are available on the ACSI Reports page in the System Performance and Metrics section of the Earthdata website. Full reports are available upon request.