About the NRT Products from GES DISC

AIRS NRT data is processed and distributed by the LANCE AIRS element at GES DISC. MLS NRT data are processed by the MLS SIPS at JPL and distributed by the LANCE MLS element at GES DISC. NRT data from both AIRS and MLS , a 7-day rolling archive and provided on a best effort basis. The user services provided are subscription (FTP pull and push) and anonymous FTP pull. The system is supported during normal working hours but is monitored for system failures and unexpected data outages. 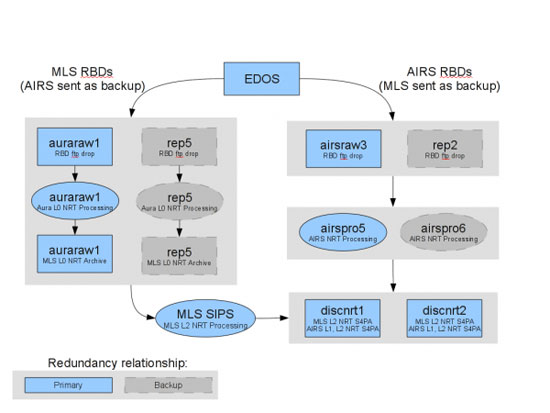 The diagram above shows simple architecture of GES DISC’s AIRS and MLS near real-time systems. 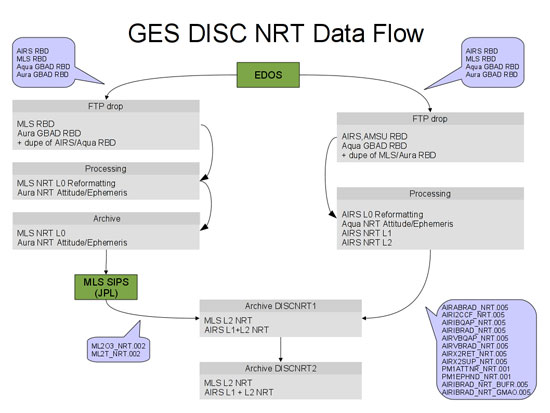 Starting with the delivery of Algorithm Version 4 in 2005, AIRS Instrument Team began to produce two types of retrievals due to the failure of HSB on February 5, 2003. Data types that encompass retrievals using HSB data will have “H” letter in the short name of the data type, e.g. AIRH2RET. Retrievals without HSB have the familiar names, e.g. AIRX2RET.

Documentation is associated with the Version of the Algorithm, which is embedded in the data filenames.

Data are organized and stored as Collections at GES DISC. Collections are different from the Algorithm Version until Version 5 where data version became the same as the collection. Our search engines will naturally show Collections.