6.1. Starting and Stopping the BES

There are two methods of controlling the BES, besd and besctl. The besd command is part of the init.d service architecture and provides system controls for the besdaemon. while besctl is the normative commandline control for the besdaemon.

The besd command is used on Unix systems utilizing the init.d service architecture to control the besdaemon. The controls are as follows:

Starting the BES At Boot Time

In Linux, if you want Hyrax to start at boot time then you can:

The besctl command is used to control the BES daemon. For Hyrax version 1.7 and earlier, this the only way to control the BES. Starting with Hyrax 1.8 (release date tentatively set for fall 2011) the Hyrax Admin Interface can be used to start, stop, reconfigure and debug the BES once the master daemon is started using this command. The Hyrax Admin Interface also provides for both hard and soft restarts of Hyrax while the besctl command does not.

and to stop it, use:

The general form for the besctl command is:

These options are used only in special circumstances; of them all the -d option to turn on debugging is the most useful. The syntax for run-time debugging/diagnostic output is:

where a typical example would be:

which would tell the daemon to send diagnostic output from the ASCII handler, the NetCDF handler and the BES daemon itself to the terminal’s standard error output.

6.1.4. About Each of the Arguments to besctl

The besctl command accepts a total of seven arguments.

Display help information for the besctl command. The help argument displays, among other things, all of the main centexts that can be used with the debug (-d) option.

Stop the BES. This is a 'hard' stop and any active connections will be dropped.

This is the same as using the stop and start commands separately. If you want to issue a 'soft' restart of Hyrax, use the Hyrax Admin Interface, which will be available in Hyrax 1.8.

This returns the master BES daemon process id number and the user id under which it is running.

The BES is actually a collection of processes; use this argument to find the process id numbers for them all.

Sometimes the stop or restart arguments don’t work. Use this argument to stop all the processes. The stop command works by sending the TERM signal to the master BES daemon process which then sends that signal to all of the subordinate BES daemon processes, but processes can ignore this signal in certain circumstances. Using the kill argument to besctl sends the KILL signal to all of the processes; KILL cannot be ignored by a process, so this is certain to stop the server.

6.1.5. About the Options Accepted by besctl

Use the -i option to force besctl to use a specific directory as the server’s root directory. This option is useful if you have several BES daemons running on one machine.

Use the -c option to force the daemon to use a specific bes.conf file instead of the file found at server root/etc/bes/bes.conf

Use the -d option to achieve fine-grained control over the server’s diagnostic output. The -d option takes a single double-quoted string which must contain the name of the output sink for the diagnostic information and a comma separated list of 'debug contexts'. The sink may be either an open stream (e.g., cerr) or a file while the contexts are defined by/in the BES source code. All modules define a context that matches their name and you can see this using the help argument to besctl, although most define additional contexts. The best way to find out about the contexts available is to look at the source code for the server.

Use the special context all to see output from all of the contexts. This will produce very verbose output.

The -h option prints a short online help message which lists the option switches. Note that this option doesn’t work when you supply an argument like start, stop, et c., except for help.

Use the -p option to set the port the daemon uses for communication with the Hyrax front-end.

Use the -r option to tell the BES where to store the master daemon’s process id number.

Use the -s option to force the server to use SSL authentication. This option is not used with Hyrax. To configure Hyrax for use with SSL, see information about running ht efront-end of the server with SSL. This is typically done by securing a Tomcat or Apache server and is standard procedure used by many general web sites.

Use the -u option to force the BES to use a Unix socket for communication with the front-end instead of the TCP socket. We rarely use this.

use the -v option to see the version of the bes. The server does not start, …, et cetera.

The HAI is a web based interface, so it can be used from any computer that can access the server using a secure connection.

The following describes the installation and configuration of the HAI followed by an explanation of its features. Note that the interface is very simple to configure in most cases - most of the steps described for Tomcat are not necessary for many sites since it’s often the case that the servlet engine is already configured for SSL and has one or more users in Tomcat’s manager role. Using the interface is very intuitive.

When Hyrax and Tomcat are installed all of the software needed to run the Hyrax Administrative Interface (HAI) is in place. However, you will need to do three simple steps in order to turn it in and use it. First you will need to configure Tomcat to use Secure Sockets Layer (SSL, https) and add a user who can login to use the interface. Then you will need to perform minimal additional configuration steps in the two parts of Hyrax - the BES and OLFS. Be sure to skim the Configuration Notes subsection.

In order to use the HAI you will need to configure your tomcat instance to enable SSL. This is very simple for most sites, and it might already be configured for you. We use SSL/https for communication with the HAI because we want to be sure that your server is secure and only those people who you want to control it can. There is a much more detailed document that describes the SSL/https configuration for tomcat 7 at the Apache web site.

Use the command "keytool -genkey -alias tomcat -keyalg RSA" to make a keystore - a place where SSL certificates are stored so they can be used by the server - and add a single self signed certificate in it. Make sure to remember the password for the keystore! If your installation of Tomcat is already configured for SSL, skip this step - you don’t need to make the keystore or the self-signed certificate. Also note that if the keytool program cannot be run from a terminal, try using it’s full path with is $JAVA_HOME/bin/keytool (Unix/OSX) or %JAVA_HOME%\bin\keytool (Windows).

Open the file $CATALINA_HOME/conf/tomcat-users.xml and add a user for the interface. Hyrax uses, by default, the role'manager', so if you already have a user in that role an want them to use the HAI, you are all set. If you don’t have anyone set in the manager role, or you want a new user, add a line like the following: <user username="admin" password="hai" roles="manager"/>. If you don’t have the role 'manager' defined, add it too: <role rolename="manager"/>

Edit the file $HYRAX_HOME/etc/bes.conf and remove the comments from the line BES.DaemonPort=11002

Edit the file $CATALINA_HOME/content/opendap/olfs.xml and remove the comments around the line <adminPort>11002</adminPort>

To access the Hyrax Administrator’s Interface, go to the base page for your server (http://you server/opendap) and follow the link to the Hyrax Admin Interface. Following that link will present a page where you login to the interface proper. Use the username and password for a user assigned to the manager role for your Tomcat server (see the configuration information above for more information about Tomcat users and roles). Once logged in to the HAI, you will see a page with two main links; one for the Hyrax front-end and one link for the back-end servers. Together the front-end and the back-end servers make up one installation of Hyrax and they can be spread across several machines. Generally the front-end is run on a host that is outside your institution’s firewall, while the back-end servers are inside that firewall on hosts where data are located. It may be helpful to review how Hyrax is structured: Hyrax is composed of one front-end server (OLFS) and one or more back-end server (BES) process.

The OLFS control panel provides access to the log for the front-end of Hyrax. Note that the control panel provides a way to set the logging level for individual classes that make up the front end of the server; this is very useful for debugging and testing new front-end plugins but it rarely needed in an operation setting. The default logging level shipped with the server is generally the most useful level of detail. By default the log lines are not displayed - just click the start button to see them. 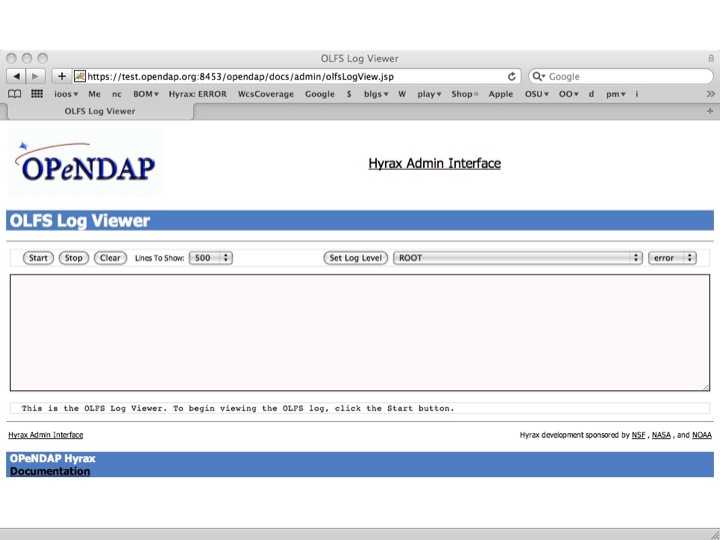 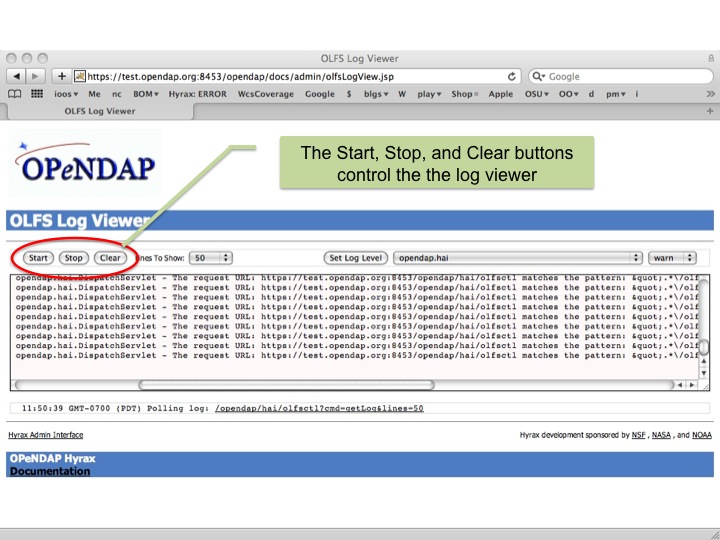 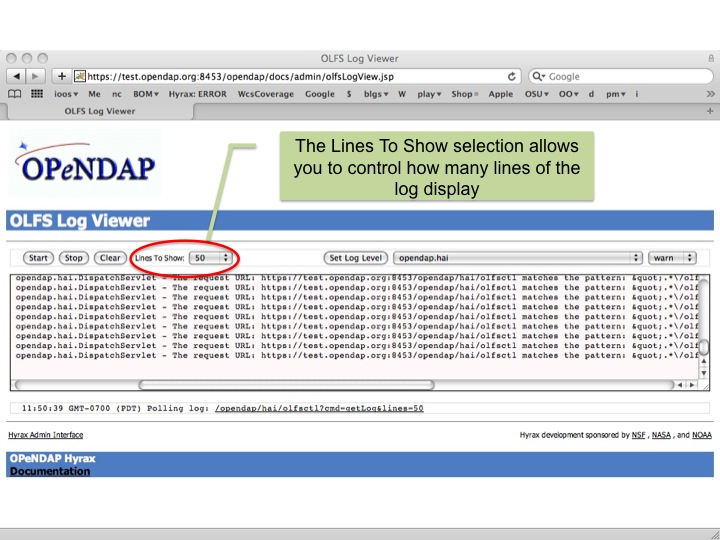 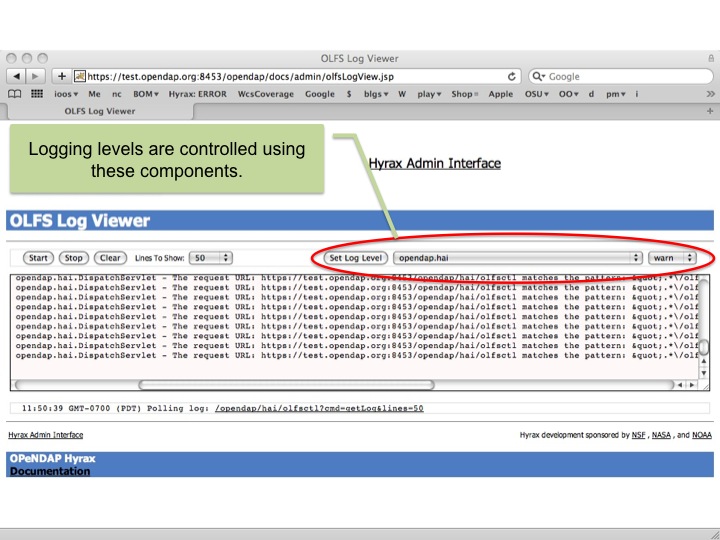 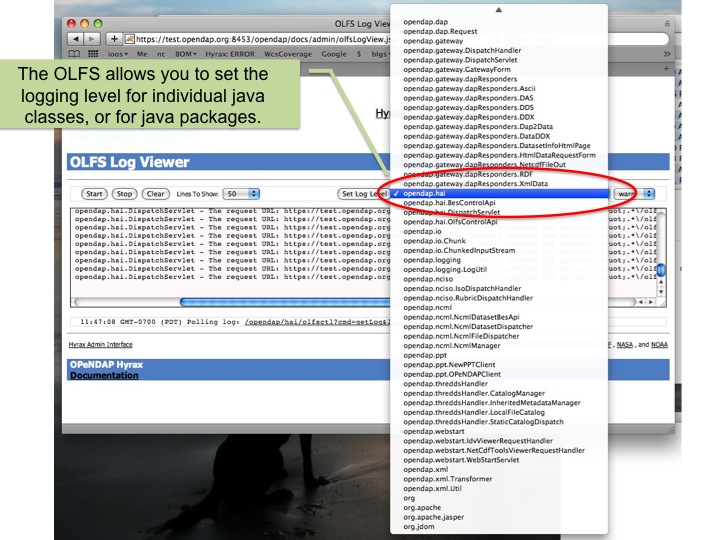 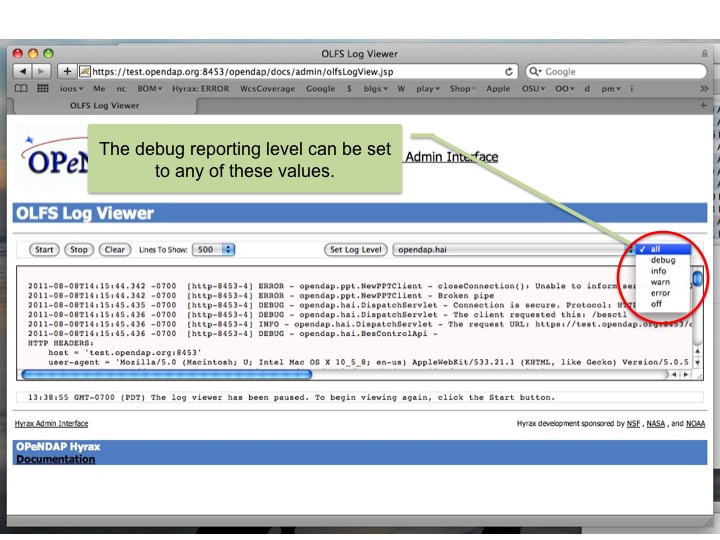 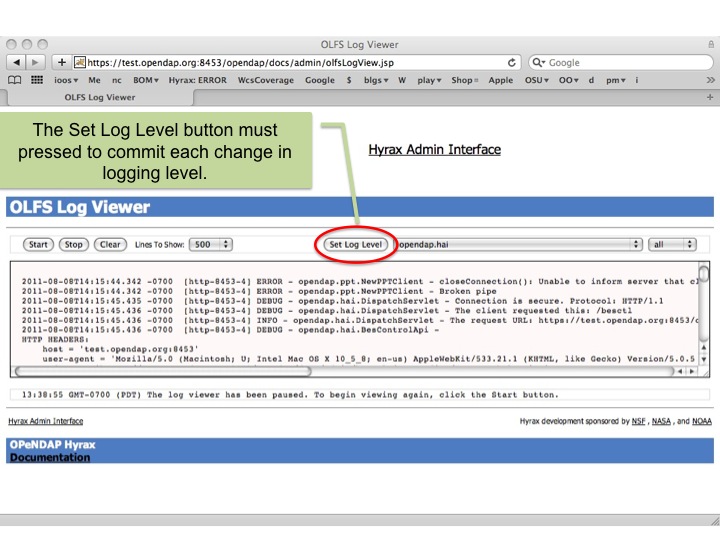 The BES control panel provides one tab for each back-end server in this instance of Hyrax. Note that in these pictures we have only one BES running and it is called '/' (slash) meaning it is the default BES. 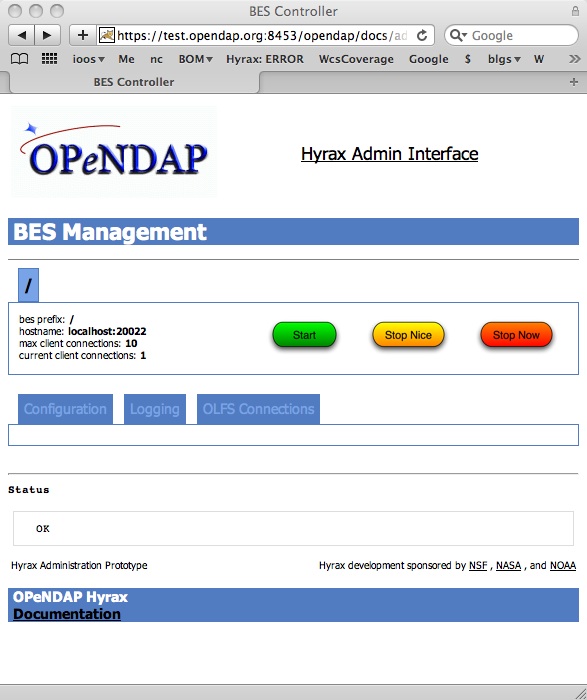 Beneath the "BES Management " banner you will see one or more tabs. You will always see a tab with the title of "/". This is the default BES for this Hyrax. If the particular installation of Hyrax has multiple BES configured in its OLFS they will appear here as tabs where the "prefix" for the BES from the olfs.xml file will be used as the tab title. 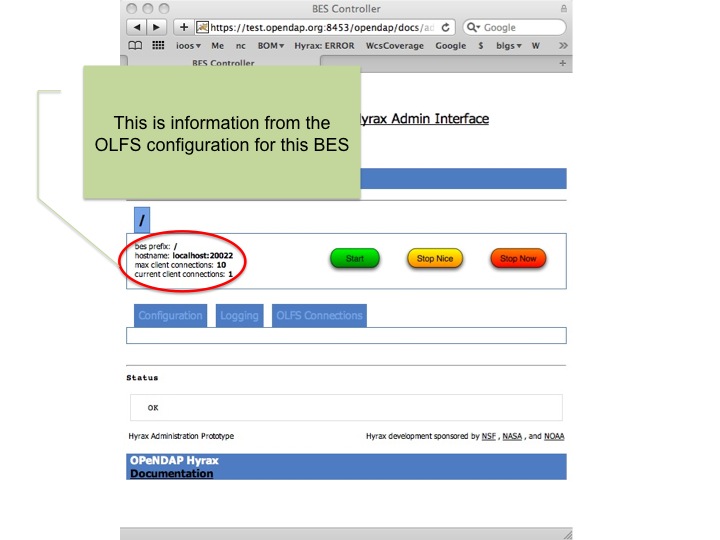 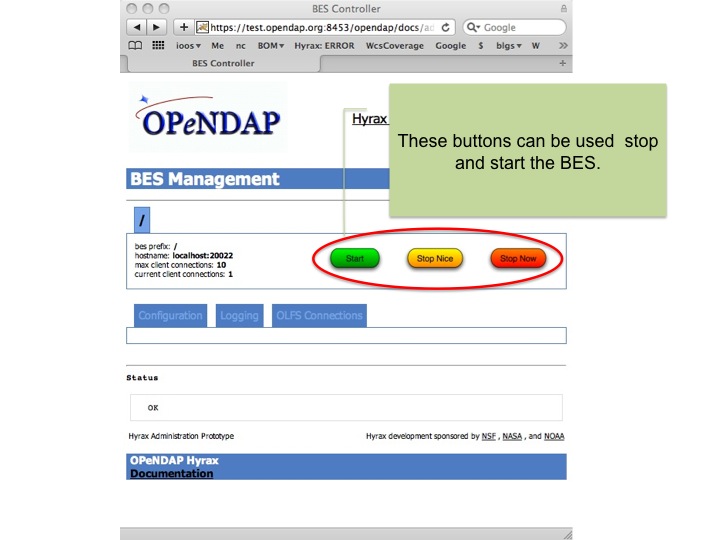 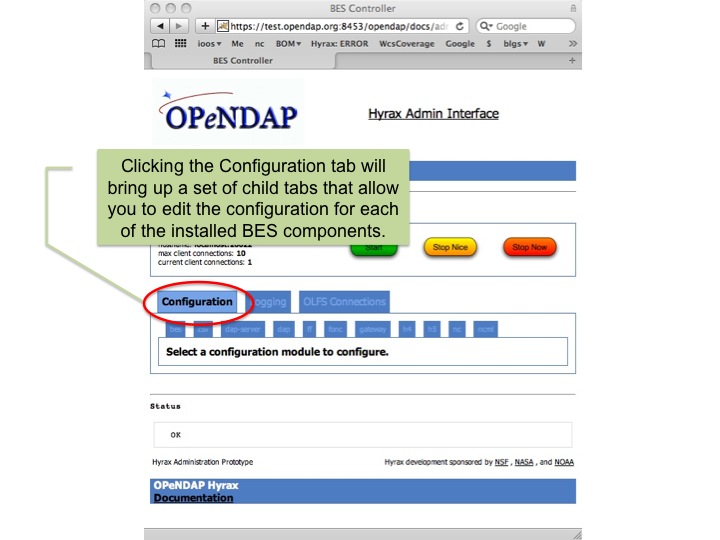 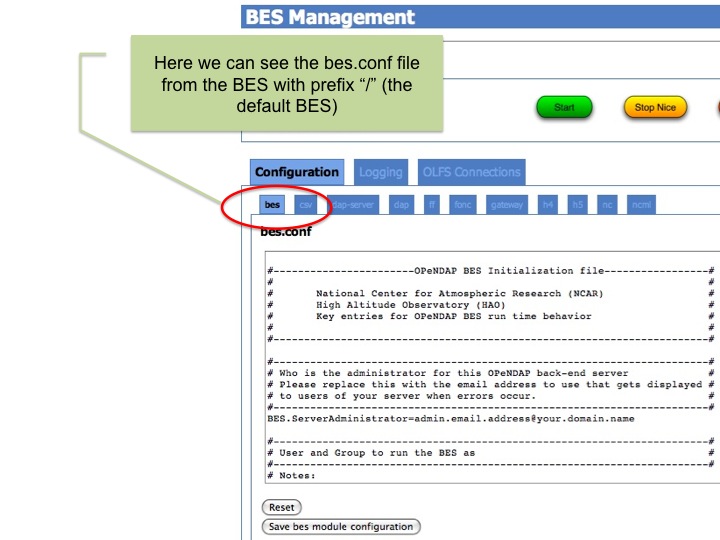 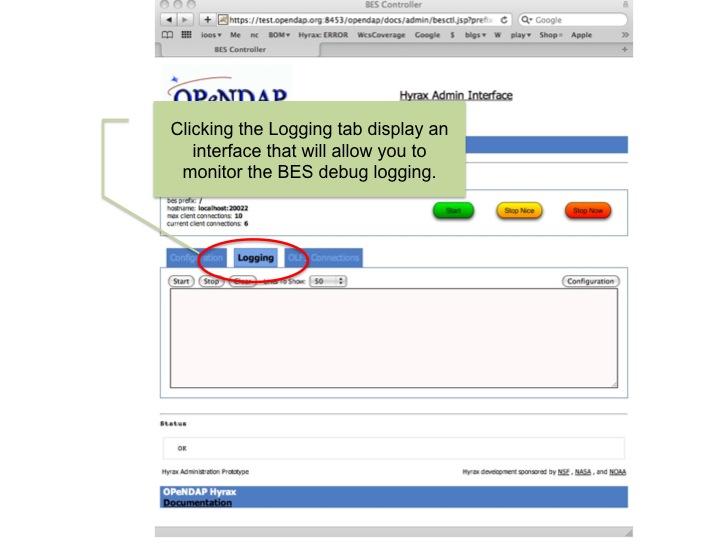 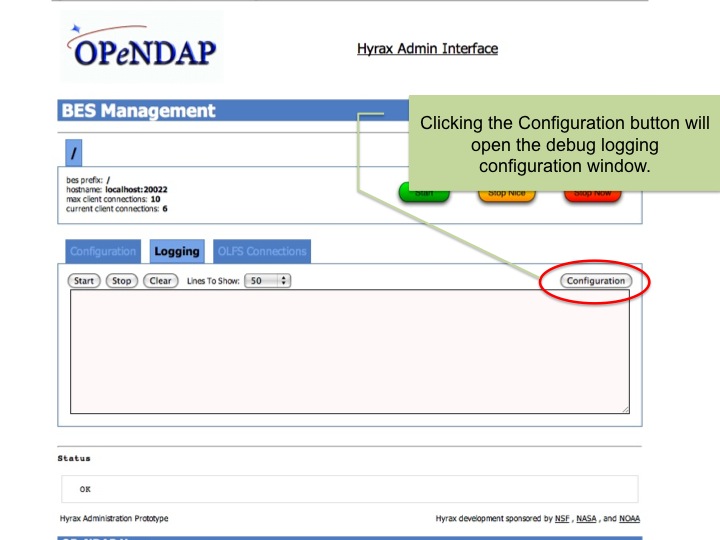 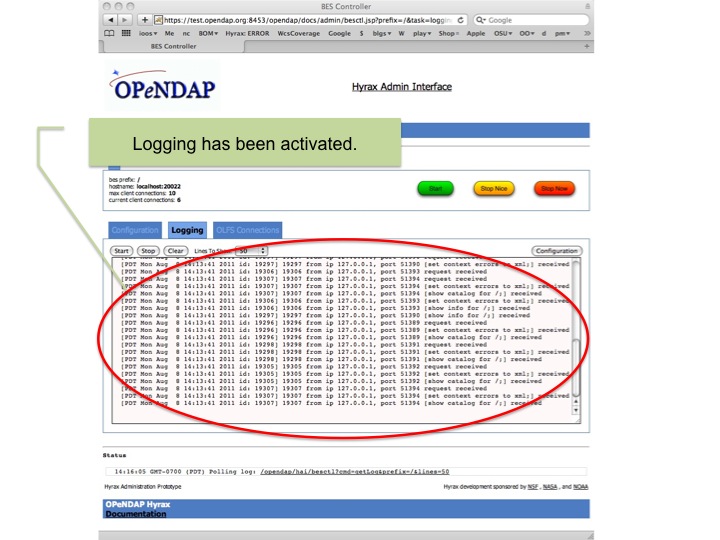 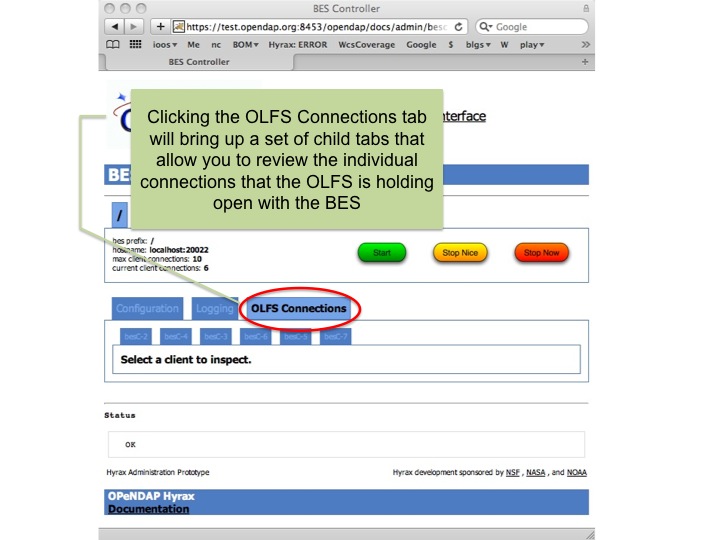 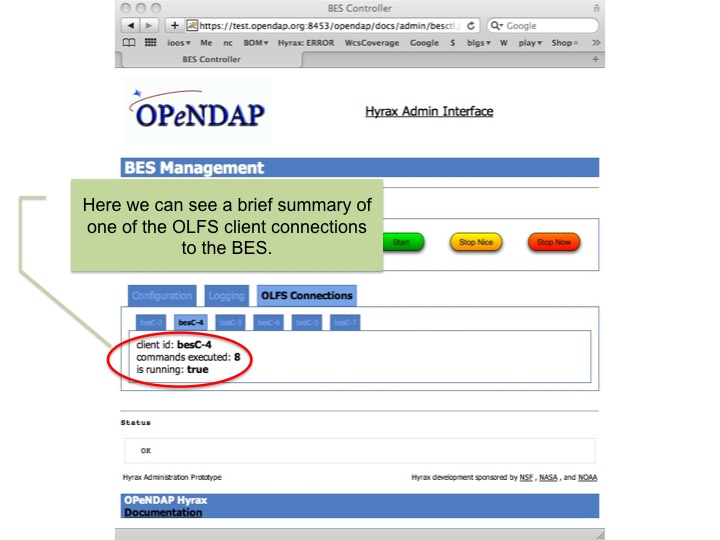