Hyrax includes an optional WCS-2 service (specifically version 2.0.1) that can be used to access all of the geo-referenced data available to the server that meet the requirements of the WCS 2 specification. This appendix describes the the kinds of data that meet these requirements along with the configuration process of the bundled WCS service.

The WCS service attempts to dynamically map DAP datasets to WCS coverages so that the data provider need not learn all of the details of the WCS specifications. All the data provider will need to provide is a simple template for each set of related datasets and coverages. The amount of detail required in a template is a function of the metadata available within a specific datatset. The template, called a DynamicService definition, must provide the domain coordinate details (Latitdue, Longitude, etc.) for a group of coverages and, depending on available metadata, may also need to provide the field/variable definitions. The template uses a regular expression to create the association between the DynamicServicedefinition and files in the DAP server.

The Open Geospatial Consortium (OGC) has developed the Web Coverage Service (WCS) as an open specification, and there is a suite of standards documents that describe different aspects of the service. Hyrax supports several of these standards beyond the basic WCS 2.0 core specification.

We have partial implementations for:

In order for the WCS service to work with a dataset served using DAP, that dataset must contain one or more coverages. The dataset variables must meet the WCS requirements for both structure and metadata. To qualify as a coverage, a variable in a dataset must meet the following criteria:

The WCS 2 service comes bundled as part of Hyrax-1.14.0 and newer. See the Hyrax download and installation guide included earlier in this document to get Hyrax installed and running, and then return to this guide for WCS configuration information.

Assuming that you have Hyrax installed and running on your local system, you should be able to quickly verify the WCS service is available by pointing your browser at the default WCS endpoint: http://localhost:8080/opendap/wcs. This link should return a browser renderable HTML page of the Capabilities document with a conspicuously empty Contentssection. 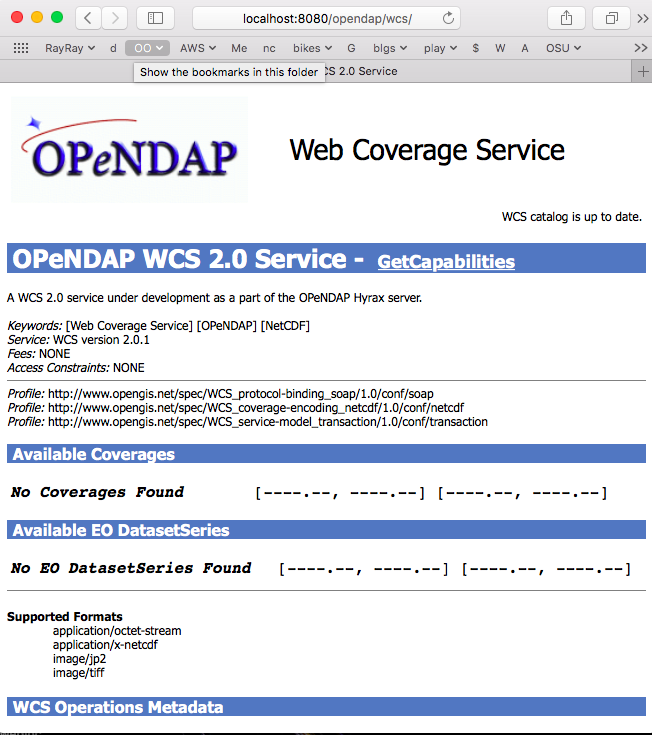 Because WCS requires certain metadata to work (whereas DAP can function with nothing more than a variable’s name and type), our service provides a way to use WCS with DAP datasets that natively lack the required WCS metadata. We do this by creating mappings (DynamicService instances) between collections of DAP datasets that have similar domain coordinates and a WCS service for the resulting Coverages. These relationships are expressed in the wcs_service.xmlconfiguration file, a simple XML document.

2prefix: This is a simple string used by the WcsCatalog implementation to distinguish each DynamicService. Choosing a value that is in some way related to the collection being serviced can be helpful to people if there are problems later.

3name: A human readable and meaningful name that will be used by the server when it creates a link to the service in the viewers page.

4pathMatch: The value of pathMatch contains a regular expression that the server uses to determine which DAP datasets will be associated with this DynamicService.

5srs: The srs attribute defines the expected SRS for the coverages associated with this DynamicService. The SRS defines the axis labels, order, units and minimum number of domain coordinate dimensions and will be used for any dataset that does not contain an explicit SRS definition. Currently only urn:ogc:def:crs:EPSG::4326 is supported.

The pathMatch attribute is used to assign a WCS DynamicService definition to some subset (or possibly all) of the Datasets available through the Hyrax server. This is accomplished by applying the regular expression contained in the value of the pathMatch attribute to the local name (aka local url, path part of url, etc. ) of a candidate dataset.

So for this dataset, the string /data/nc/fnoc1.nc would be compared to the pathMatch regex when determing if a DynamicService endpoint should be advertised in the viewers page for the dataset.

In the previous example the pathMatch attribute is set like this:

Regular expressions are very flexible and it is possible to use them to specify a number of things at a time.

This will match any dataset path that contains the word "coads" and that ends with ".nc".

This will match any dataset whose name begins with the following:

The pathMatch feature allows a DynamicService definition to be associated with a sort of "virtual collection" of datasets on the server, which may be related merely by the fact that their coverage representations are similar.

The Hyrax WCS relies on the DynamicService definition to be responsible for identifying the specific variables in the DAP datasets that are to be used for the geo-referenced domain coordinates of the coverage. The domain coordinates must appear in the order that they appear in the dimensions of the DAP dataset. They must also match the order of axes represented in the SRS.

Many DAP datasets have variables with more than two dimensions, and in general WCS 2.0 only supports 2D data. However, latitude, longitude, and time are frequently seen as domain coordinates in scientific data. These can be utilized in the WCS as long as the inner most (last) two dimensions are in agreement with the SRS.

In the server we treat time like any other coordinate dimension, so if there is a time dimension on the data, it needs to appear in the set of DomainCoordinate definitions for the service.

Let’s consider the DomainCoordinate definitions from the example above:

In our friend EPSG:4326, we know that the axis order is latitude,longitude and that’s the order in the example. There is also an additional time coordinate which comes prior to the defintions for latitude and longitude.

This tells the service that the coordinate axis named latitude is bound to the DAP variable lat, that a default value for size is 361 elements, the default units are degrees ("deg"), the default minimum value is -90.0 and the default maximum value is 90.0. What this means is that when the DynamicService processes a DAP dataset into a coverage, it will check the dataset’s metadata for this type of information. If any of these values can be determined from the dataset metadata, then that value is used; otherwise the values expressed in the DomainCoordinate definition are used.

Longitude and time are handled in the same way as latitude.

Many DAP datasets either lack the metadata for determining which variables will make suitable coverages or the information may not be in an expected form or location. In order to enable these datasets to be exposed via WCS, Hyrax allows the definition of a field in the DynamicService element.

In the following DynamicService definition, each variable in the dataset is exposed as a WCS field and basic information required by WCS is provided.

A DynamicService definition with field elements

1name - The name of the WCS Field to associate with the DAP variable. This value must be an NCNAME as described above.

4units - The units of the values returned